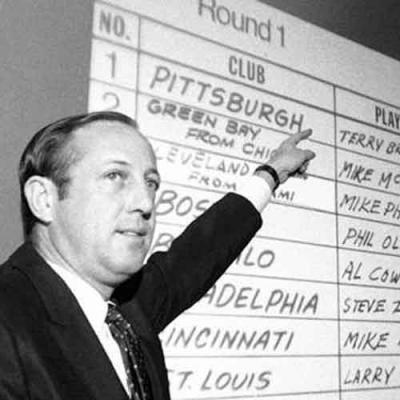 TO ME, ONE of the most incredible phenomena in the extremely long time I've been following sports is the evolution of the NFL draft, a show that has now become one of the most anticipated events in sports. As a matter of fact, it seems there is more excitement for the draft than there is for the Super Bowl.

Believe it or not, when I was growing up, very few people really "followed the draft," me being in the vast minority. For the record, I have been keeping a close eye on this event for 60 years. I used to have to wait until the day following this affair to get the results as the dozen teams participated in approximately 32 rounds every year.

There was very little information available as Street and Smith magazine was about the only source available. And I spent hours and hours scouring the magazine, looking up facts on every played selected.

As a matter of fact, and this is a fact, many of the teams used Street and Smith as a scouting tool in the later drafts to pick a player. This led to some strange happenings, including a couple of years where teams picked players that had died before the draft, as most teams had just one or two – at the most – scouts in the organization.

To show how far the draft has come as a major happening in America – I swear if missing Flight 370 was discovered Thursday, the media would not have reported on it until Monday – just look at Erie gridder Mike McCoy, a product of Cathedral Prep and the University of Notre Dame.

He was sandwiched between the first pick Terry Bradshaw by the Steelers and the Cleveland Browns third selection, Mike Phipps, a quarterback from Purdue. Just to show bad moves by the Browns is not a new happening, they traded Paul Warfield for the right to draft Phipps.

I talked to McCoy about this "big day" a couple of years ago and I was astonished by what he told me.

"I called the number, told them who I was and they told me I was now a Green Bay Packer."

He said there was absolutely no fanfare and no national media whatsoever.

My, my how times have changed. Could you imagine if this was the second pick overall in the recent draft?

Everyone in America would know the story that he went to St. Mark's Seminary for ninth-grade, before moving on to Prep and ND. And then some!

As I pondered the draft, I couldn't help but think of the Cleveland Browns and how hard it is being a Browns fan. I know they actually won some NFL Championship titles in my lifetime – the last being in 1964, my senior year of high school – but after some serious brooding, I have come to the conclusion the Browns have to be the most jinxed franchise in all of sports since that last crown 50 years ago.

All Browns fans know about the insane pass Brian Sipe threw in the end zone against the Raiders, The Drive, and The Fumble. As well as numerous happenings that fall under the category of "just bad luck."

However, there are two extreme misfortunes that jump out at me that are borderline incredible.

Ernie Davis, one of the all-time classy athletes and the first African-American to win the Heisman Trophy (1961), was selected first overall in the 1962 draft by the Washington Redskins. However, the Skins opted to trade the powerful Davis, and the lucky team to get him was Cleveland – for Hall of Famer Bobby Mitchell, no less.

To make a long story short, in one of the saddest sports stories of all-time, Davis was struck down with leukemia and never played a down for the Browns. He was a clone of the great Jimmy Brown and the possibility of having these two stars in the same backfield had Browns' fans in a state of near ecstasy.

But the Syracuse star never played a down in the NFL. What were the odds of that happening?

And my next bad memory of the poor luck the Browns have had over the last 50 years concerns another Syracuse standout, the great Jimmy Brown himself. And this definitely could only happen to the Browns.

Brown, more than arguably the greatest running back in the history of the NFL retired in the prime of his career, calling it quits at the age of 29 to pursue his acting career. Only in Cleveland!

Also, in 2002 The Sporting News named him the greatest football player of all time, and he also was a four-time MVP as well as a first team All-Pro pick eight of the nine seasons he played.

And add this to the mix: Brown retired when he was just a year shy of being 30; a couple of seasons ago the Browns drafted QB Branden Weeden when he was 28.

As we have said many, many times, "Only the Browns!"

BUFFALO BILLS — I thought they got a sensational pick with Clemson wide-receiver Sammy Watkins, the player I wanted the Browns to take. Considered the best wide-out in the draft, he really could be great. They also picked up a couple of huge offensive tackles and much-needed linebackers. The reason the Bills didn't get an A is the high-price they had to pay to Cleveland for right to move up in the draft to select Watkins — B+

CLEVELAND BROWNS — There was a lot of excitement in Cleveland, at least for 24 hours when the Josh Gordon story broke to cast a shadow on the draft. However, I was impressed with the organization that stuck to its plan and filled a lot of needs. I didn't like Johnny Manziel at four (I wanted Watkins and that was before I heard the Gordon story), but he could be a good deal for the 22nd overall pick. The deal with Buffalo, however, made this a great draft for the Brownies. — A-

PITTSBURGH STEELERS — The Steel City crew looked for speed and got it on both sides of the ball with Ryan Shazier (linebacker) and the incredibly quick Dri Archer. The Steelers were also able to address several positions of need. This was a beyond solid affair for Pittsburgh — B+