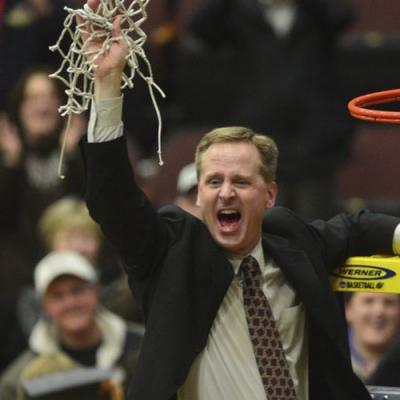 WHILE FLIPPING through the channels recently (Note: I am a professional channel surfer), I came across a hoops encounter featuring Miami (OH) and Ohio University, Miami coached by former Gannon University boss Cleve Wright. And there are many similarities between him and ex-GU men's mentor Tom Chapman. "Chappy" moved to Olean, N.Y., to lead the St. Bonaventure program after an extremely successful tenure with The Golden Knights.

I started wondering how tough it is to go from an ultra-successful Division II coach to a moderately successful Division I boss, the jump being much tougher than I originally thought after viewing the career turns of both Wright and Chapman. While the jury is still out on Coach Wright, looking at both coaches shows how extremely rugged the transition really can be.

GU was the first D-II stop for both coaches and both of them had programs that catapulted The Golden Knights on a yearly basis, Coach Wright with two teams in the Elite Eight and Coach Chapman with a powerful squad that lost to powerful Kentucky Wesleyan in the national championship contest. Also, they were both hired late in the hiring process after great seasons, both decisions catching many fans by surprise as it appeared they were already making plans for the upcoming season.

However, Miami and the Bonnies came-a-calling with a lot of cash in hand and the challenge of running a D-I program, an offer no one as competitive as these coaches could pass up. And name one great coach that doesn't relish a rugged challenge.

First of all, I want the record to show that I thought both these coaches would be huge successes as they were proven winners that I thought could win on any level. Coach Chapman's record speaks for itself, much to utter shock, but I feel there's no doubt Coach Wright will get the RedHawks headed in the right direction. He's just too good of a coach not to.

I dealt with him a lot, becoming personal friends while he was in Erie, and he was brilliant at building excitement in his program with a flair for the dramatics. He stayed on top of everything and one of his moves I remember the most is he never ran from a question. He enjoyed the tough ones.

I used to do a radio show called "Knights on the Line"  following GU games and he never showed up after a win, sending an assistant or two, but he always arrived to answer the callers after a loss. Coach was a genius in deflecting the negative comments and knew it was his job to face the fans in tough times. The fans loved him.

Resident Golden Knights' hoop authority Jimmy Roddy, a former player at GU (1988-92), broadcaster, and the man behind www.GannonHoops.blogspot.com, said this regarding Chapman: "First and foremost, Coach Chapman was an incredible recruiter. He consistently attracted Division I-level talent to Gannon – amazing athletes who played above the rim.

"You rarely saw that in Division II."

Roddy also pointed out, "He was a showman as well. He knew how to press the buttons of the media and the fans. Prior to big playoff games at the Audi, he would walk through the stands and high-five the fans in the bleacher seats, pumping his fists while saying, 'We need you.'"

Chapman also won over many fans when there would be a long line for tickets days before the game (when the Hammermill was sold out on a regular basis) and he would show up with boxes and boxes of donuts, handing them out to everyone waiting to buy a ducat. The PR genius was also the talk of the town when he showed up in a tuxedo to coach a game at the Tullio Arena.

I don't know what happened in Olean, but it was pure magic in Erie.

Meanwhile, the soft spoken Wright achieved his results in a different way and was just as popular as Chapman as he took the women's program to a level never seen before.

His overall mark at GU was a brilliant 233-100 as he put The Lady Knights on the national map.

Personally, he was another coach that was great to work with. He seemed to appreciate anything you could do for his program and would let you know his feelings. If I had one work to describe him, I would say, "Sincere."

Roddy explained, "Cleve was an intense coach but was also a gentleman. How many coaches can you describe as 'friendly' during the season? His personality consistently attracted outstanding student-athletes to the Gannon program."

Also, Roddy added, "If Cleve didn't want to coach basketball, I think he could be a very successful business consultant. The culture he built around the Gannon women's program was world-class.

"He genuinely cared about everyone who helped the program – from the players to everyone sitting at the scorer's table. I know after one season (maybe he did it more often) he sent a personal note to everyone on the stats crew."

This isn't a knock at the former men's coach as he was under a lot of pressure to win more than a women's coach and he was getting paid to win, and that's what he worked to do. GU fans have more patience with their women's coaches and that enabled Cleve to have more leeway when compiling wins and losses.

The fact is: both these men were the right people for their jobs.

TRIVIA TIME – With the recent passing of legendary University of Nevada-Las Vegas basketball coach Jerry Tarkanian, do you know who he succeeded? Be honest and try and answer this without the help of modern technology. If you Googled this, you probably cheat in solitaire, also.

Answer in the next edition of the Erie Reader.

CLUE – Psyche! There is no clue.