ER Sports: Looking Back On One of the "Greatest Games Ever"

A look at  the legendary – not only in Erie but nationally – basketball game between Youngstown State University and Gannon College. 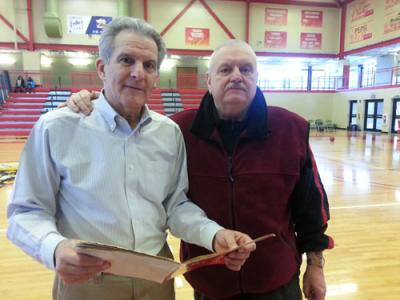 In the history of local sports, there have probably been thousands of "that was one of the greatest games ever," and I think I have seen many of them, including one special contest that still gives me goose bumps every time I think of it. And that is the legendary – not only in Erie but nationally – basketball game between Youngstown State University and Gannon College.

These two rivals met at a jam-packed Gannon "Audi" for the second time in the 1965-1966 season and the crowd of 2,907 didn't get out of the arena until the 11 o'clock news was just starting. The exact date was Feb. 28, 1966 and it was the second time in seven days the Division II national powers met, the Golden Knights winning by two points in both clashes.

However, it was the second meeting that had the entire country talking.

I was a freshman at Gannon and can take you to the exact seat I was sitting in for what seemed like an eternity, as both teams were on the edge several times of claiming the victory. As a matter of fact, they announced three times that the freshmen curfew (you remember curfews, don't you?) was being extended before finally letting the frosh know they were allowed to stay until the game concluded.

I vividly remember the start of the game, as YSU legendary coach Dom Rosselli had his team slow the tempo down – there was no shot clock or three-point line – against the very athletic and talented Golden Knights. The contest was deadlocked 42-42 after regulation, and then the OT tallies were 44-44, 47-47, 53-53 67-67 and the finale, 71-69.

The most danger the Erie squad was in came during the fifth extra period when the Penguins opened up a five-point lead with less than three minutes to play before unbelievably letting it slip away. A five-point advantage in a contest being played at this slow pace was akin to blowing a 20-point margin in the final 10 minutes.

Gannon's Mel Witherspoon, who is now an Erie City Councilman, had his photo plastered all over the country, as he played every minute (that's 70 minutes, folks) of the thriller. He was shown relaxing in the GC locker room with his feet up, and no one deserved it more as he finished with 17 points and double digits in rebounds. However, this was an easy night for the powerful 6-5, 220-pounder, who survived a lot tougher nights on the Mean Streets of Newark, N.J.

The locals won the game when 6-4 sophomore Madison "The Fly" Purvey from New York City took a great pass from "Bantam" Ben Wiley to drop in a layup at the buzzer, the home team and their fans celebrating wildly in The Audi. This was Purvey's only field goal of the game, as he finished with three points.

All five GU starters averaged in double figures for the season.

Morocco, one of the classiest coaches in the PSAC at Seton Hill, and Culliver were teammates at Trafford High School before signing with YSU. Culliver is one of my favorite "visiting" performers to ever play at The Audi.

It was usually a thriller when these two squads met, Gannon posting a 72-70 victory in Ohio the week before, as the Golden Ones had to overcome a 36-point performance that evening by the 6-2 Culliver.

These were two of the premier "small college" teams in the country and it was big news when they met, the Penguins being rated as high as fifth in the country earlier in the season. This Monday night encounter was the final regular season game of the season for both teams, Gannon entering the affair with a 19-3 chart while Youngstown showed 18-5.

However, ironically enough, the exciting game paled in comparison when it was announced following the clash that a GC administrator had turned down an invitation to the small college post-season tournament earlier in the day, The Knights staying home with a final scintillating record of 20-3 while the Penguins accepted the bid and moved on with an 18-6 card.

The controversial moved sparked outrage among Gannon students and fans, the students taking to the streets the next afternoon in a protest, marching through downtown Erie. And yes, being a concerned freshman at the time, I was part of the peaceful demonstration, the march failing to make an impact on the powers-to-be at the school.

This is definitely "one of the greatest games ever" in Erie's athletic history.

And if you see me at the Hammermill Center, just ask me where I was sitting that evening and I will be glad to show you.

OVERTIME – This game caught the fancy of all college hoops fans and Erie Times Sports Editor Gene Cuneo was asked to write a story for the Sporting News and it appeared in the March 12, 1966 issue. Cuneo was one of the most respected sports' writers in all of the USA.

The game was offered on tape delay by Channel 12 or Channel 35 and three of the players went to my parents house with me and we viewed all the action until 3 a.m., the contest getting started at midnight on delay. I have tried to find that game on tape, but no one has a copy, including the TV station.

As mentioned, Tony Morocco is the Seton Hill coach and there isn't a time he and I don't reminisce when the Griffins and the Golden Knights meet. Morocco loves the game of basketball, and he's always willing to stop and talk to local fans before and after the game.

This was one of the greatest GC teams of all time, and it was a crying (I was crying) shame The Knights didn't get to play in the post-season.

Much of the information was provided by Gannon fan(atic) Dave Spusta who let me use the game program and SI article by Cuneo. Long-time fan (obviously) Spusta kept score that evening in his program.

The game was broadcast on WWYN 1260 with Bill Shelley and Doug Davis.