No one failed, but JRL doles two As, a B+, and a C+. See how the local teams stack up half way through the season. 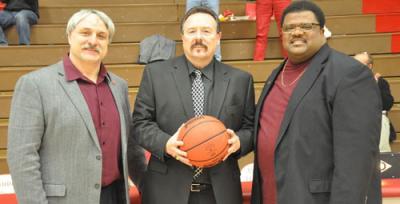 THE 2014-15 MEN'S COLLEGE basketball season has been extremely exciting, and if the 2015 segment is half as entertaining, this will be something special. As we head into the holiday break, the Erie Reader will take a glimpse back and hand out mid-term grades for the four squads.

Please take note the schools are listed alphabetically, so there can be no whining about playing favorites due to placement.

Keep in mind, too, that the winner of the PSAC West will host the state tournament this season. And these games are going to be amazing.

EDINBORO UNIVERSITY – The Fighting Scots enter the holiday break with a 5-5 mark overall and a 3-4 chart in the PSAC West. The Boro squad has several excruciating losses on their record, but are still in a position to make a strong run at the playoffs.

Edinboro has shown it can play with anyone in the league and will have two meetings after the first of the year with hoop leader Gannon and a solo contest with second-place Mercyhurst.

Making the Scots so dangerous is the one-two punch of junior Henri Wade-Chatman (19.3) PPG and General McLane redshirt freshman Jaymon Mason (15.2 PPG), the ex-Lancer in the hunt for PSAC Freshman of the Year honors. He has been named PSAC Western Division Freshman of the Week twice already.

Cleary has put together a team that is getting better every outing and plays an exciting brand of hoops. Look for them to be in the playoff chase right down to the final game.

This is a tough team to grade, but the close losses do hurt. A couple of key hoops would have them hovering near a solid A, but facts are facts.

GANNON UNIVERSITY – The Golden Knights' John Reilly celebrated his 400th victory recently, but he's looking to add a lot more in the win column, and his team is poised for a strong run after the holidays as The Golden Knights are playing some of the best-ever-seen basketball at the Hammermill Center. GU is allowing a meager 56.3 PPG while posting an overall record 8-4 with six straight wins.

Gannon is the lone undefeated team in the PSAC, East or West, with a 7-0 chart.

Leading the scoring charge is the senior dynamic duo of four-year starter Adam Blazek (16 PPG) and Girbran Smith (14.4 PPG), while powerful Raphael Thomas-Edwards is close to averaging a double-double with 10.8 PPG and 9.6 RPG. A'Darius Porter contributes a healthy 6.7 PPG and 8.1 RPG.

The Golden Ones are close to an A+ but also close to a D. If you attend one of their contests, you are probably going to see a contest go down to the wire. The four losses could've been wins, but several of the wins – including a pair of OT contests – could've gone the other way, too.

GU should be in every remaining game, just on its unbelievably intensive defensive effort.

MERCYHURST UNIVERSITY – Coach Gary Manchel has one of the top surprise teams in the PSAC, as the Lakers show an overall record of 8-4 and a conference chart of 5-2, despite being a team that was decimated by injuries at the beginning of the season. The Hurst will be a factor in the new year, as Manchel's teams are always strong on defense and this year's edition is no exception.

Manchel, in his 12th season on the hill, saw the Lakers give up just 60.3 PPG last season, second best in the country, MU winning 17 games and advancing to the PSAC final four for the second time in three seasons.

As is the case with most PSAC teams, close games are a way of life, but the setback that stung the most was the defeat to Gannon when the Lakers led 41-26 with 10 minutes left. Gannon's Adam Blazek hit a three-pointer with seconds remaining to give his team the two-point win.

However, Manchel's team is in a great position and will be fighting to best the host team in the PSAC post-season playoffs. MU is definitely doing much better than expected.

PSB is averaging 69 PPG and allowing just 62 PPG while limiting the opposition to a field goal percentage of 37 percent.

The Cubs are solid at both ends of the court, and Niland could have one of his better teams ever. The PSB boss is in his 21st season and has compiled 394 wins, including seven NCAA appearances.