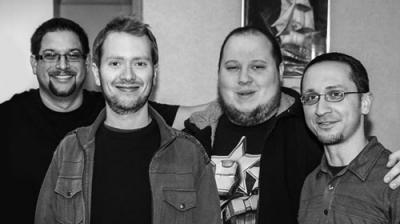 There is plenty to be uncertain of in our daily lives, but if there is one thing we can be certain of here in the Gem City region, it is this: Summers in Erie never lack live music. Every summer, all summer long, there is live music to be heard – and in this case, beer and coffee to be consumed.

WQLN is giving Erie yet another chance to see live music in the form of the Sounds Around Town summer concert series, featuring local bands and kicking off Friday, July 11 with jam-band favorite Eric Brewer & Friends. The series runs Fridays until August 1 pond-side at the pavilion on the WQLN campus.

"[Sounds Around Town] lets us celebrate some of the things that we have, some of the home-grown performers that we have here in town," says Tom New, president and CEO of WQLN. "All of these [bands] are amazing performers and to put that on television is just another way of celebrating life here in Erie."

The free concert series emceed by WQLN's own jazz host Gary Finney will also be recorded live in high-definition to be aired on WQLN-TV Thursday nights throughout the summer and on WQLN Radio through this year.

"To be able to put these guys on television, shoot them in high-definition and really come up with a nice, clean production, and to also air the concerts on the radio speaks more towards localism, and I like that," New says.

And if it rains? No worries. The concert will be relocated inside WQLN's TV studio, and the show, production and all, will go on as planned.

So bring some lawn chairs, blankets, snacks, and get ready to sip on craft beer and coffee samples, courtesy of Erie Beer and McCormick Coffee, while listening to some great tunes, courtesy of WQLN and Eric Brewer & Friends. – Jessica Courter