Eric Brewer, Vendettas Headline Another Block Party In The Park

Boot your kickstand to the up position and take the revised Block Party for a spin. 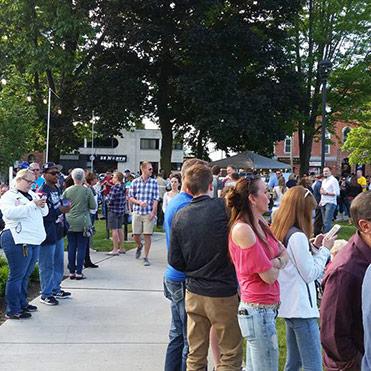 Despite a change of scenery (in the park versus on the streets), one of Erie's prominent summer traditions pedals ever onward, and that's a (Sch)win(n) for everybody involved.

Whether you're cycling through your options physically (as a participant in the Lake Erie Cycle Fest's Opening Night Fun Ride) or mentally, you'll find they all lead back to Liberty Park, the site of the latest installment of the Thursday night Block Party. The Fun Ride will embark on a 10-mile tour of Erie cultural and historical treasures, departing from the U Pick 6 Tap House (333 State Street) at 6 p.m. and arriving at the event upon its conclusion. Representatives of Sluggers and Sullivans will be standing by to replenish your depleted fuel stores (although you may have to supplement their Bud Light products with your own electrolytes).

You'll definitely need to carbo-load because The Vendettas and Eric Brewer & Friends are set to keep the party rolling with a full slate of tunes. The Vendettas, led by talented vocalist Stephanie Hand, ably shift gears through a variety of soul-inflected covers, from Santana's "Black Magic Woman" to Sade's "Smooth Operator." Eric Brewer & Friends recall the jam band's '90s heyday, channeling such mainstays as Dave Matthews Band, Phish, Umphrey's McGee, and String Cheese Incident. The group, consisting of Brewer (guitar/vocals), Charlie Meyer (keys/vocals), Steve Barone (drums/vocals), and Ralph Reitinger III (bass) has earned those comparisons — these are gifted instrumentalists in perfect lockstep with one another. Jazz, funk, rock, and blues are all spokes on their wheel of musical influences.

Boot your kickstand to the up position and take the revised Block Party for a spin — musicians of this caliber will continue to make it well worth the ride. — Matt Swanseger