The Erie Art Museum is set to unveil their LEED certification on January 11! Find out what that means here! 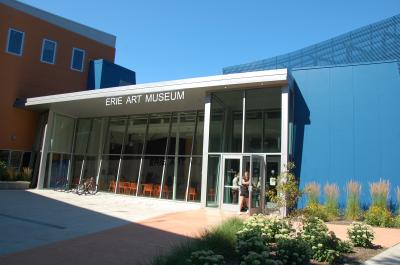 The holiday season is finally coming to a close but that doesn't mean there needs to be any shortage of good news. In fact, Erie has good reason to keep celebrating as the Erie Art Museum has recently become the first LEED (Leadership in Energy and Environmental Design) certified building in the city.

If you've been paying attention the Erie Art Museum should already be on your radar as they've found tremendous success over the past year not only in their diverse range of exhibits and galleries, but through their FILM series and other events as well. These successes have been due largely to the 2010 expansion of the museum that not only added more visitor friendly gallery space, but also earned the Erie Art Museum its Gold Level LEED certification. And if that wasn't enough, the new space has done wonders from bringing the museum's architectural aesthetic up to a more modern standard.

In order to commemorate the recent certification, the Erie Art Museum has planned a special celebration on Jan. 11 entitled The Art of Being Green. The event is set to kick off with an unveiling of the LEED certification at 1:30 p.m. and will be followed by The Art of Being Green in conjunction with the museum's ever popular Second Sundays series which offers visitors free admission from 1 to 5 p.m., a guided tour option, and a creative, art-making activity. Unique to this Second Sundays feature will be an emphasis on displaying the eco-friendly aspects of the museum that earned its LEED certification.

So make an effort to get down to the Erie Art Museum on Jan. 11, and get a feel for how the city of Erie is starting to finally look towards a green future.