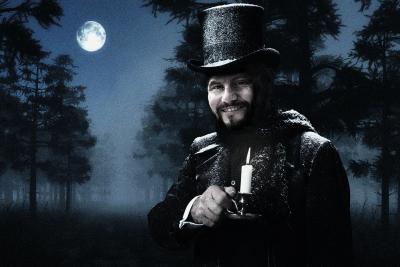 Erie Reader/ ysbrandcosijn
Current County Executive Brenton Davis has been behaving a lot like Ebenezer Scrooge, disinvesting from and dismantling the Diversity, Equity, and Inclusion Commission which was created to help fight racism in Erie.

Erie County Executive Brenton Davis is getting coal for Christmas.

That's because the man, to whom much was given, has taken his biggest step toward disinvestment in the City of Erie, and the community at large, when he systematically dismissed all but one member of the County's Diversity, Equity, and Inclusion (DEI) Commission, also known as Diverse Erie. Erie County Council established the DEI Commission in 2021 with $3.5 million of American Rescue Plan (ARP) funds designated for "populations disproportionately impacted by the pandemic," as defined in the council ordinance that established the commission. It was a natural extension of a previous ordinance that declared racism a public health emergency in Erie County in September 2020.

"Having a DEI commission puts Erie in line with similar initiatives in other cities like Cleveland, Pittsburgh, and Philadelphia, which have been doing this work for years," Trent Hargrove, the chief diversity, equity, and inclusion officer for the Pennsylvania Bar Association, concluded in an opinion piece for the Erie Times-News. "Erie is now catching up and to keep up and not fall behind again, Diverse Erie cannot be lost. Erie cannot abandon this critical effort."

Unfortunately, the actions taken by Davis over the past two months lay the foundation to do just that: abandon this critical effort. Not only does his ill-advised revocation of appointed commission members delay the work of the commission, it threatens the fragile progress in the area of race relations that this commission represents.

The problem for Davis is that the commissioners he inherited were appointed by his predecessor, Kathy Dahlkemper, who chose not to run for a third term in 2021, and the previous County Council, which voted to declare racism a public health crisis, to create the DEI Commission, and to fund it with ARP funds — none of which fit Davis' political ethos. From the outset of his administration, Davis called into question the viability of the commission, threatening to defund the commission on multiple occasions just three months into his first term in office.

When those efforts failed, Davis began dismantling the DEI commission by charging that three commission members, including its chairman, Gerald Blanks, had conflicts of interest related to the commission's first effort to distribute grant funds from its $3.5 million seed. Blanks is the executive director of the Greater Erie Economic Development Corporation (GEEDC). The other two members initially removed for conflicts of interest are GEEDC board member Adrienne Dixon, and Matt Harris, a retired Pennsylvania State Police Trooper who holds a leadership role with East Side Renaissance, Inc., which is developing a plan for Parade Street revitalization.

Both organizations received $250,000 grants from the DEI Commission.

All three commissioners with conflicts of interest — Blanks, Dixon, and Harris — disclosed their conflicts, and abstained from discussions and votes related to their organizations' grant applications.

The commission's solicitor, Tim Wachter, told the Erie Times-News that the commissioners acted in accordance with the commission's by-laws and the Pennsylvania Ethics Act. In other words, there was no wrongdoing, perceived or otherwise, as Davis alleged. Blanks and Dixon were appointees of former County Executive Kathy Dahlkemper and Harris was appointed by former Councilman Scott Rastetter, who lost his re-election bid in the 2021 Republican primary to Councilman Charlie Bayle.

These weren't Davis's people and he hoped to change that. We'll come back to this thread in a moment. It's becoming a trend.

The county executive has the power to remove appointees from boards and commissions, according to the county's Home Rule Charter. Following the dismissal of Blanks, Dixon, and Harris, Davis declared that the remaining DEI Commissioners should cease doing business until the three vacancies were filled, despite Davis' previous criticism that the commission hadn't done enough in its inaugural year.

When the remaining board members took action on grant funding, contract approvals, and other commission business in October 2022, Davis followed up by issuing letters requesting the resignation of three more commissioners — Tiffany LaVette, Gwendolyn White, and Sarah Carter. Though challenged, LaVette, White, and Carter maintain that the commission seats remain theirs.

Brandy Cortes remains the lone commissioner following the purge. She just happens to be an appointee of Councilman Brian Shank, a devotee of the county executive.

This is the second time since taking office in January 2022 that Davis attempted to usurp the independent authority of an entity related to county government. Davis tried to replace the leadership of the Erie County Redevelopment Authority in May 2022.

He issued letters requesting the resignation of Chairwoman Kate Phillips, Secretary William DeLuca, and Treasurer Laith Wardi in an attempt to oust Redevelopment Authority CEO Tina Mengine by replacing the authority board members with his own appointees. Mengine ran former County Executive Kathy Dahlkemper's successful congressional campaign in 2008 and later served as her chief of staff in Washington, D.C.

"This is 100 percent a vendetta against Tina Mengine," Wardi told the Erie Times-News in May. While the county executive does have the power to remove political appointees without the consent of County Council in many cases, the office does not enjoy the same authority when it comes to the Redevelopment Authority because it was formed under the Pennsylvania Urban Redevelopment Law, which states that authority members serve five-year terms and continue to serve after the five-year appointment until successors are named.

And in situations where the office does have such power, it doesn't mean that power should be executed with impunity. But that's exactly what seems to be happening.

This county executive spent his first year in office attempting to undermine the authority of other elected offices. Because at the end of the day — and at the end of his term — the ability to appoint and remove board and commission members continues to reside with the office — the seat — that makes the appointments, not the person who holds it.

When a county executive chooses to override the power of the other appointing agents, be they Republican or Democrat, that office is cheapened, not emboldened. The system of checks and balances designed in documents from the United States Constitution to the Erie County Home Rule Charter delimit authority for this reason.

The dismissed and challenged members of the DEI Commission may take legal action to retain their seats, and they should. They were appointed because of their professional experiences and the value they provide to a nascent organization with a heavy charge, not because of their political affiliation.

The attempted overreach of this administration into the actions of Erie County Council and the independent authorities that guide county resources is disruptive, at best, and immoral at its most extreme. It's not an effort to become more transparent, as the county executive would protest in the media. Instead, it is an attempt to shrink the sphere of transparency within the county executive's office.

Let's face it, transparency is simply a matter of size. This one was short to begin with and it's getting shorter by the day.

In the end we'll understand whether this was simply another attempt to disenfranchise communities of color from making decisions for themselves or if it was an attempt to consolidate power in an office that is limited, appropriately, by its governing document.