Erie At Large: Counting on Candidates 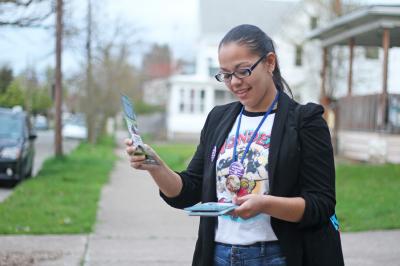 Jessica Hunter
Jasmine Flores, one of six picks for Erie City Council recommended by the Erie County Democratic Party, campaigns for one of three open seats.

By now you've seen the signs. Literally. It's election time.

On May 21 you will be asked to cast your vote in this year's municipal primary election. If I lost you at "municipal primary," allow me to add some context. This is the election cycle that a majority of registered voters ignore despite the fact that it's the one that has the greatest impact on your daily life.

Worried about the schools? There are 65 school board seats on the ballot across Erie County. Choose wisely.

Worried about your taxes? Or how about those potholes? We're electing county, city, and borough council people, as well as township supervisors.

Worried about the criminal justice system? Judges are on the ballot, too, at the state, county, and district level. I recall Hunter Thompson writing something about people not caring about who was elected sheriff or judge until they found themselves in the hands of a violent fascist. Our sheriff — who is not a violent fascist, for the record — is not on the ballot this year. But the district magistrate who handles arraignments, the district attorney who files the charges, and the Court of Common Pleas judges, before whom you will have to defend yourself, are on the ballot.

Rest easy. There are good candidates running for these seats this year. But it is a primary election which means that you do have choices to make about who will be on the general election ballot in November. And in many cases, the people who win their primary races on May 21 are going to go unopposed in the general election, which makes this cycle all the more important.

If history is any indication of future performance, as it often is in politics, turnout will remain low and those who do show up to vote — the supervoters — trend older and whiter than the general population. Those voters who don't typically vote in municipal elections, but will this year, are going to do so because of personal reasons, not political ones. They're going to vote because a candidate dated a friend's sister in high school, or they grew up in the same neighborhood as a candidate, or because 50 years ago their mom went to the same church as a candidate's family.

All politics is local, right?

And it's this level of locality that leads these elections to be known as "low-information" races. The public doesn't know a lot about the people running for offices like these during election cycles like this because candidates don't have enough money to disseminate their messages broadly and, despite the number of forums and candidate events at local venues, voters have busy lives with real responsibilities that often prevent them from plugging in.

So this year, for the first time in a very long time, the Erie County Democratic Party vetted candidates for Erie City Council and recommended six of the 11 candidates in that race. It was, essentially, an attempt to help voters with their homework. Three City Council seats are on the ballot this year.

The selection process was approved by the Party's Executive Committee and was overseen by a recommendation committee comprised of the ECDP Executive Officers, City Ward Chairs or their designees, and the chairpersons of the Party's nine constituency caucuses — Young Democrats, Labor Caucus, LGBTQIA+ Caucus, Environmental Caucus, Black Caucus, New American Caucus, Democratic Women's Committee, Progressive Caucus, and the Veterans Caucus.

Candidates for City Council were invited to respond to a questionnaire designed by the recommendation committee, which included questions related to caucus and platform issues as well as city governance. Candidates who completed the questionnaire were interviewed by the committee. Following a review of the questionnaire and participation in the interview process, the six named candidates were selected by the recommendation committee and submitted to the County Committee for final approval at the regular monthly meeting of the Erie County Democratic Party in April.

Ten of the 11 Democratic candidates for City Council participated in the recommendation process. The incumbent, Mel Witherspoon, did not submit a questionnaire and was therefore not considered for a recommendation.

The process was fair and transparent, and unlike other endorsements awarded by political action committees throughout the county, these recommendations were based on candidates' qualifications rather than an ideological litmus test on a particular political issue. The recommended candidates represent a diverse array of political perspectives and a range of practical personal and professional experiences that support the candidates' desires to serve on City Council.

These candidates were selected because they were able to connect their motivations to run for office with the work of Erie City Council. Not all candidates had an adequate understanding of the job, which disqualified them from the recommendation.

Among the aforementioned characteristics, the recommendation committee also believed that it was important for the recommended candidates to increase the geographic, racial, and ethnic diversity of City Council.

Currently, five of the seven members of the at-large City Council reside in Erie's 5th Ward. While three of our recommended candidates also live in the 5th Ward, one candidate resides in the 2nd Ward on Erie's east side and the other two live on Erie's lower west side in the 3rd and 4th wards.

Moreover, the recommended candidates include two Hispanic women, one African-American man, and three white men. One of the candidates has previously served on both the Erie School Board and Erie City Council, one is a pastor at a downtown church that primarily serves homeless and underserved populations, and all have a deep commitment to public service based on their personal and professional experiences in education, healthcare, criminal justice, and life.

We're confident that voters in the city of Erie will choose wisely on May 21. Much is at stake as the city faces tough questions — both social and financial. These three seats could form a voting bloc with the current members of council to shape the future of Erie.

We're counting on it.