The public conversation about fracking in Erie County is a quiet one. 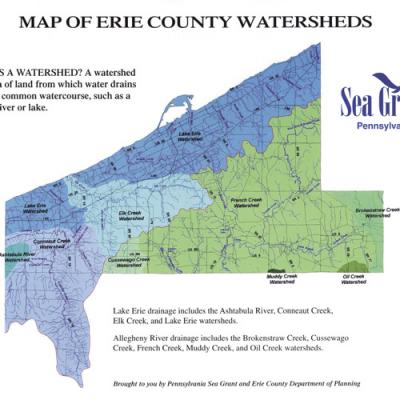 The public conversation about fracking in Erie County is a quiet one. That's right. There is a public conversation about fracking. It's just that it's usually limited to people who read first editions of Rachel Carson's Silent Spring, and folks who believe in the immediate negative impact of the practice on their livelihood, like the vintners and fruit farmers in North East Township who opposed the fracking plans of Lake Erie Energy Partners in 2011.

There are several reasons for the community's complacency. First, most of Erie County sits on the Utica Shale formation rather than the highly coveted Marcellus Shale that underlies much of western and central Pennsylvania. Second, there are a few – very few – regulations that make hydraulic fracturing more complicated near the Great Lakes. And third, when we see Lake Erie from the bayfront, bluffs, or Presque Isle, we take for granted that Erie's supply of fresh water is indissoluble and infinite. It is not.

It's against the law for oil and gas companies to frack under our Great Lakes, but there's no prohibition on the practice near the streams, creeks, and rivers that feed them. And here's the problem: If the headwaters that drain into Lake Erie are contaminated by the toxic chemicals used in the fracking process, our access to public drinking water, irrigation systems, and the ecosystems tied to freshwater fishing and tourism, is gone.

It's against the law for oil and gas companies to frack under our Great Lakes, but there's no prohibition on the practice near the streams, creeks, and rivers that feed them.

It's also against the law for oil and gas companies to extract water from the Great Lakes for use in fracking operations. So as a loophole, companies in northern Michigan have drilled more than 500 fracking wells and withdrawn more than 15 billion liters of water from watersheds in Kalkaska County, which has been called "the center of fracking in the Great Lakes basin" by the Council of Canadians, a non-governmental watchdog organization with chapters across Canada. Runoff, spills, and contaminated water in this region returns to the Great Lakes.

Currently, water from Lake Erie serves the Erie Water Works – which includes Lawrence Park, Wesleyville, and parts of Harborcreek Township, Millcreek, and McKean Borough – as well as the water authorities of Millcreek, Fairview, and Summit townships.

Environment America reports that between Dec. 2007 and Aug. 2014, the Pa. Department of Environmental Protection determined there were 243 confirmed cases of contaminated drinking water across the Commonwealth. When you read the summary of the Public Herald investigation of Pa. DEP in the pages that follow, you'll quickly realize that cases of water contamination confirmed by the DEP are grossly underrepresented.

It's data like this and concerns about the potability of local water sources that led local environmentalists on the Destination Erie Environment Committee to recommend that a prohibition on fracking be instituted in Erie County's Lake Erie Watershed. Tom Fuhrman, who chaired the Environment Committee, wrote in a guest op-ed for the Erie Reader that "County Executive Kathy Dahlkemper immediately embraced the idea and had the courage and vision to say so publicly."

Eighteen municipalities across Pennsylvania have passed local ordinances to limit or regulate fracking activities in their domain. Erie County should do the same.

The environmentalist and essayist Edward Abbey advised, "better a cruel truth than a comfortable delusion." If we take away anything from the Public Herald investigation, it's that comfortable delusions have become the standard operating procedure for regulators across Pennsylvania. The realities are stark and the choices are clear. As corporate attention shifts from the Marcellus Shale to the Utica Shale, and as fracking practices for the Utica Shale are refined, there will be greater interest toward drilling in our watersheds.

We can address the cruel truth of fracking and proactively regulate the activities that impact our natural resources. Or, we can wait for an energy corporation from Texas or Oklahoma to bring us potable water when we can no longer supply our own.

Jim Wertz drinks public water and would like to keep it that way. He can be reached at jWertz@ErieReader.com, and you can follow him on Twitter @jim_wertz.