A local look toward golf for life skills. 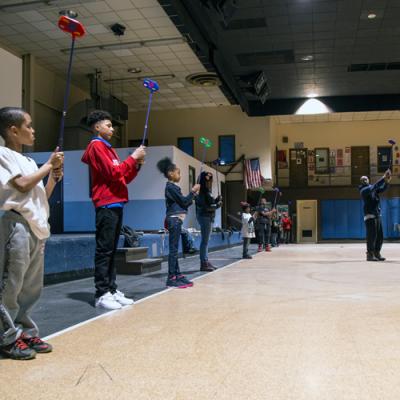 There is no shortage of prescriptions for leading Erie's youth away from crime and violence and toward a path of formidable individualism, education, and hope. Jobs, civic engagement, and church regularly top the list. Rarely do shouts of "Golf!, Golf!" rise from the chorus of pols, pundits, and influence peddlers.

Former judicial candidate, local attorney, and Edinboro University Professor Elvage Murphy believes that golf instills value for those who play the game. That philosophy led to the launch of Shoot Above Par in 2010. Murphy and his wife, Janel, began the organization by sponsoring golf lessons for local children, an investment that caught the attention of family, friends, and others interested in supporting extracurricular activities for kids.

Murphy, himself an avid golfer, believes that golf helps kids learn to manage stress and anxiety, develop attention to detail, and foster relationships through casual, professional, and competitive interactions.

"For us it's about measuring ourselves against the values that we're talking about – honesty, integrity, and sportsmanship – and it's about exemplifying those values in a way that they see and experience," Murphy says. "We get them on a course, and because of the partnerships we have, they can play two holes, three holes, they can play nine or eighteen. We've removed that barrier for them."

Murphy says that creating a context for seeing and emulating black golfers, like himself, is also an important part of the program. "Most of the kids know who Tiger Woods is, but beyond that they haven't really been exposed to golfers of color," says Murphy. "We start putting a face with the game that these kids can relate to."

Overcoming barriers to entry on the golf course is only one step, and perhaps not even the most important. Murphy says that creating a context for seeing and emulating black golfers, like himself, is also an important part of the program.

"Most of the kids know who Tiger Woods is, but beyond that they haven't really been exposed to golfers of color," says Murphy. "We start putting a face with the game that these kids can relate to."

His passion and the mission of Shoot Above Par, a 501c3 non-profit organization, led to the sponsorship of a new initiative called DRIVE (Develops Rewarding Inspiring Values for Everyone), a program of The First Tee junior golf program based in Florida. Erie's DRIVE is the first of its kind in the region. Murphy was able to bring the program here, in part, because of the support of entrepreneur and golf enthusiast Steve Kinch and an anonymous donor, who helped cover startup costs.

Murphy applied to establish a local First Tee program late last year. He received notice in early December that Shoot Above Par had been granted access to the DRIVE curriculum, which includes training for instructors and access to junior golf resources. Much of the equipment for the program has been purchased by, or donated to, Shoot Above Par in the past few years.

By January, Murphy only needed a location. He chose the John F. Kennedy Center on Erie's east side. 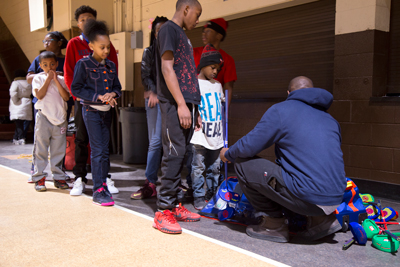 "The JFK staff is committed to teaching it and they had the infrastructure in place. Why not build on that? We touched base with them in December and they were excited, overwhelmed," Murphy recalls. "It was also near public housing and I've found that the east side isn't always given top priority when it comes to developments, new initiatives, and opportunities. JFK was committed to opening this up to kids who would frequent the Booker T. Washington Center and the Boys and Girls Club. So for us, that was also important because other programs like this have always been reserved for residents of a certain area, but right now we were thinking bigger than one neighborhood and we thought these kids really deserved it."

Murphy says he sees these values in action when he golfs with Shoot Above Par participants.

"When we're on the golf course and they see me pick up an aluminum can off the grass and throw it away, the kids might ask, 'Mr. Murphy, why are you doing that?' and it's easy to explain to them respect for property and public space," he continues. "A couple of holes later, they're running off the fairway to pick up a piece of paper blowing along the course. It's not just about the golf."

Murphy's optimism and enthusiasm for golf and the youth of Erie is palpable. He sees this sport as a metaphor for life's struggles and an opportunity for local youth to hold themselves and each other accountable for their scores and for their behavior, both on and off the course.