Future of brick-and-mortar facility is in our hands 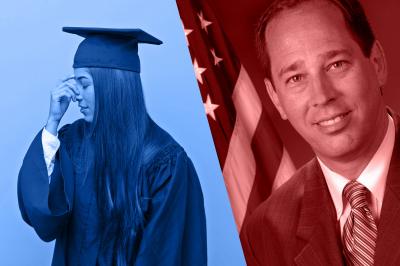 Republican Joe Scarnati (right), president pro tempore of the Pennsylvania Senate, has remained a staunch opponent of a potential brick-and-mortar Erie County Community College, preferring instead for any funding to be diverted to his online Northwest Pennsylvania Regional College.

When Democratic presidential hopefuls talk about free college — or even free college for some people — they and their proposals are met with skepticism. How would we pay for such a promise, many wonder. How could such a proposal be viable in the educational marketplace?

If such skepticism is elicited by someone who could be the next President of the United States, why then would we trust a legislator from Jefferson County, who represents neither the people or interests of Erie County, to deliver on the same promise? That is the paradox we face.

In a February 7 op-ed in the Erie Times-News, the president pro tempore of the Pennsylvania Senate, Joe Scarnati, offered such a proposal to the citizens of Erie. Free college is near, he suggested.

But at what cost?

Scarnati would like to see an endowment set aside at the Erie Community Foundation to fund the establishment of the community college converted into a scholarship fund for residents of Erie County to take classes at the Northern Pennsylvania Regional College (NPRC), which he helped to found and would likely benefit financially from upon leaving office. The NPRC needs such fiscal stimulus because of sluggish enrollments and unmanageable overhead. Tuition and state funding aren't making ends meet.

Scarnati contends that the ongoing effort to establish a brick-and-mortar community college in Erie County is redundant and unnecessary. According to Scarnati, the people of Erie County have a two-year option: His two-year college, the NPRC.

The unaccredited NPRC now offers classes to students in 10 counties of northern Pennsylvania, including Erie, via video classrooms in which students watch an instructor on a television screen broadcast from a remote location.

For those of you who ever struggled with math or reading in high school, imagine how much more difficult your educational journey would have been if your teacher hadn't been in the same room. Instead, imagine them on a screen and you have to hold up your work to a camera in order to receive assistance.

Or for those of you who attended vo-tech, or took a shop class, imagine receiving welding or carpentry instruction from someone on TV.

This is the future of education in Republican hands. This is how they would have you believe that we can do more with less when it's just simply less.

These illustrations aren't precise, but neither is the claim that the NPRC delivers to the people of Erie County what a brick-and-mortar community college would. And that's what's so challenging about the stance taken by Scarnati and other opponents of the Erie County Community College. They claim that an Erie County Community College would be a duplication of services that the NPRC already provides, when in fact it is the NPRC that is duplicating services while failing to meet the remedial education and workforce development needs that are at the heart of the community college mission.

According to enrollment reports in the Erie Times-News, more than half of the NPRC's enrolled students are high school students who are taking college classes through an initiative known as "dual enrollment." These discounted classes are already offered by all of our accredited regional universities — Edinboro University, Gannon University, Mercyhurst University, and Penn State Behrend — to high school students throughout Erie County for approximately $300 per class. These classes allow high school students to earn college credits at a reduced cost while still in high school, giving them a jumpstart on their college careers and saving them thousands of dollars in the process. This is not an unmet need, yet it makes up the majority of the NPRC's efforts.

Moreover, the NPRC enrolled 582 for-credit students between 2017 and 2019. Only 39 of those students were degree-seeking students from Erie County, and all of the credit-bearing hours were approximately equivalent to just 43 full-time students across 10 counties by 2019, according to the Times-News analysis.

Now the NPRC is seeking a variance on an industrial building in Millcreek Township so that it can offer its version of workforce development and expand its course offerings. What happened to Scarnati's founding premise for the NPRC that Erie County needs no brick-and-mortar facilities to educate its residents?

The market is speaking and the math simply doesn't add up. The future of education may be technology-driven, but it shouldn't be driven by 20th century technology. Prospective students know this and somewhere in his not too distant political vision, Joe Scarnati knows it too.

Urbanist and scholar Bruce Katz, who has visited Erie as a speaker and consultant on several occasions, is prone to warning small middle-American regions like ours to seize control of their destiny because "no one is coming to save you." The same is true of our educational future.

Erie County remains the largest metropolitan area in the country without a community college and there is no alternative. Should it look like the brick-and-mortar community colleges established in the 1970s and 1980s?

But Erie County has a chance to break the mold and to develop a 21st century model of community education that allows us to chart our own course.

Scarnati and company need to get out of the way for that to happen. As president pro tempore of the Pennsylvania Senate, Scarnati wields disproportionate influence over the Board of Education as well as other politicians and political appointees. Not only are the outsiders not coming to save us, they're trying to break us in the process.

Opponents of the community college hide behind taxpayers who are uncertain about the need and potential for a brick-and-mortar community college. But if public education was left in the hands of taxpayers, it would be dismantled. Elected officials have the political will to keep that from happening and the same should be true of establishing a community college in Erie County.

Ask questions. Demand great answers. But let's get this done.

Erie County should be the site of Pennsylvania's 15th community college, although no development can begin until the Pennsylvania Board of Education blesses its proposal.

If no one is coming to save Erie, Erie should, at the very least, have its destiny in local hands.

Jim Wertz is a Contributing Editor and chairman of the Erie County Democratic Party. He can be reached at jWertz@ErieReader.com and you can follow him on Twitter @jim_wertz.