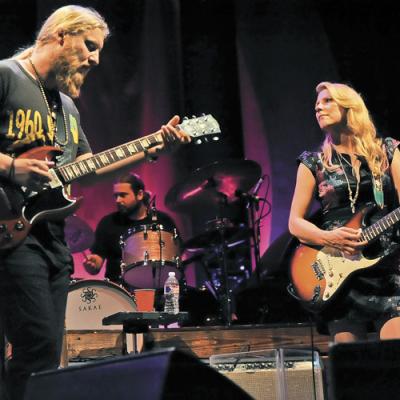 A couple of Sundays ago, Tedeschi Trucks Band rolled through town and put on a fiery ninety-plus-minute set at the Warner Theatre. The band was great, the crowd was atypically engaged, and it was encouraging to see a diverse – economically diverse, anyway – crowd in the storied halls of Erie's landmark theatre.

In case you haven't been downtown on a Sunday night recently, there aren't many dining options. So it wasn't a complete surprise to see all 12 members of the TTB roll into Cloud 9 for dinner before the show. After all, they had arrived earlier that day at the tail end of a 10-hour drive from New York City, where they had just wrapped up two nights at the Beacon Theatre. What better taste of Erie for this traveling roadshow? Who doesn't love a fusion tapas wine bar?

There was just one problem: there was no room at the inn and the band was turned away.

The restaurant was ill-equipped for the volume of traffic it experienced on this particular Sunday evening. One bartender, a slow kitchen, and flustered serving staff stand out as key indicators that someone forgot to check the downtown events schedule.

TTB was at the Warner and WWE was at Erie Insurance Arena. It seemed like the kind of Sunday restauranteurs long for, especially when you're one of only a handful of open establishments in a relatively narrow downtown corridor.

I can't say what was happening on State Street because I had my heart set on lamb burgers, blistered kale, and beer. Lots of each, in fact. But when my party arrived at Cloud 9 well ahead of showtime, every table was reserved. We were offered seats at the bar, which suited us just fine. The patio seating was not set up, despite it being an otherwise beautiful Sunday night in downtown Erie.

Watching the band walk away, I reflected on a job interview I had years ago in a small Illinois town 200 miles from anywhere. It made Erie look like Metropolis. There was a Walmart, a Tractor Supply, and a few corner bar/restaurants. But its foodie claim to fame was that it was home to the first Jimmy John's, the substitute submarine sandwich franchise that's begun to dot the local landscape. It was a charming town, but I couldn't help wonder where I would eat on a Sunday night.

Rumor has it that on this Sunday night, the band ultimately found their way down State Street … to Jimmy John's.

This isn't a cautionary tale about how wandering blues folk go hungry. But it is a comment on how the city chooses to display itself to others.

In the lobby of the Warner that night I ran into old friends who moved long ago to Pittsburgh and parts unknown. But they returned for a great concert they weren't going to see in the 'Burgh and hoped to find the city better than when they left it. "Erie hasn't changed much," was the mantra. Most were unmoved by my protests in defense of Erie: craft beer, the lake, the simple fact that they were here to see Tedeschi Trucks Band, and Uber, for the love of all that's musical and good. We have Uber.

These encounters were juxtaposed by other friends at the show who were preparing to leave town … for work, for culture, for something they hadn't found here.

It seems that missed opportunities have come to define the city we so ardently attempt to defend in these pages, issue after issue.

It seems that missed opportunities have come to define the city we so ardently attempt to defend in these pages, issue after issue.