Candidates for several of November's key races on the ballot 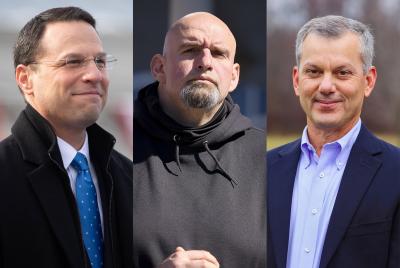 Our democracy is in peril. We've said it so much over the past few years that it almost seems cliche to continue saying it. But, sadly, it's true.

Across the country and right here in Pennsylvania, Republicans wrap themselves in the flag and declare themselves patriots as they attempt to dismantle our most fundamental rights and privileges. Insurrectionists who participated in the January 6, 2021 assault on the United States Capitol are Republican candidates for Pennsylvania governor, representatives in Congress, as well as State House and Senate candidates.

In Erie County, Republican candidates for the 4th Legislative District include members of the alt-right hate group, the Proud Boys, and other weak men who attempt to display their strength by showing off the size of their guns. It's a Freudian nightmare.

Each of these Republican candidates will, no doubt, theme their campaigns in opposition to the workings of state government and the problems of bureaucracy. Hypocrites all. Let's be real, Republicans are the problem with the government.

The new legislative maps, which dictate the political boundaries of legislative districts in the Pennsylvania House and Senate, as well as our congressional districts, are the fairest maps this state has had in more than a generation. The bi-partisan legislative redistricting committee that oversaw the redistricting process created competitive districts that hold the potential to balance the partisan makeup of the state legislature and Pennsylvania's congressional delegation.

Here in Erie County, redistricting means that every local legislator's district has changed. State House District 1, represented by Pat Harkins, is now composed of the City of Erie, except the Fifth Ward in the southeastern section of the city. The Fifth Ward is now entirely part of House District 2, represented by Bob Merski, who now has constituents in Wesleyville, Harborcreek, and Greene Townships, in addition to Summit Township, which was already a part of HD 2. House District 3, served by Ryan Bizzarro, now includes Millcreek and Fairview townships in their entirety. Harkins, Merski, and Bizzarro are unopposed in the Democratic primary election, although Bizzarro will have a Republican challenger in the general election.

The most significant redistricting change in Erie County is the new House District 4, formerly represented by Republican Curt Sonney, who announced his retirement in January. After redistricting, HD 4 is a geographic behemoth stretching from North East to Corry in eastern Erie County, across the southern tier of Erie County south of Summit Township, to Elgin Boro in west county and north again to Girard and Lake City. There are five Republicans (referenced above) vying for their party's nomination in this very Republican district. Former Corry City Councilwoman Chelsea Oliver is the sole Democrat in the race for HD4.

Republican Brad Roae is seeking a ninth term in House District 6 and will face off against Democrat Narissa Galt in November. Both candidates are unopposed in this primary. Roae used to represent a small portion of Fairview Township, but since redistricting HD 6, which is mostly in Crawford County, now includes a handful of municipalities in southwestern Erie County, from Albion Boro to the Ohio border.

In the race to unseat Kremlin Mike Kelly, the lying, undemocratic, Q-Anon spouting insurrectionist who is seeking his seventh term in Congress, Erie County Democrat Dan Pastore is one of two Democrats seeking the nomination. Pastore was the founder of Erie.Net – the region's first internet service provider in the 1990s – and more recently started the Fairview based FishUSA, an online fishing tackle and outdoors shop he founded in his garage with the help of his wife and brother and now employs more than 60 people. Pastore will face Rick Telesz, a farmer from Volant, Pa. on the May ballot.

The highest profile race in this primary election cycle has been the race for Pennsylvania's open United States Senate seat. Three seasoned legislators are seeking the Democratic nomination in this race. Lieutenant Governor John Fetterman maintains a healthy lead in recent polls and in fundraising, but Congressman Conor Lamb of Allegheny County and State Representative Malcolm Kenyatta continue to make strong appeals to voters as we head toward the May 17 election. Regardless of who the Democratic nominee will be, any one of these three candidates are a superior option to the millionaires and megalomaniacs seeking the loyal embrace of the Trump base in the Republican Party.

While the Senate race has dominated national and statewide media attention, the most important race on the ballot remains the one for Pennsylvania's next governor. There is no primary contest for the Democratic nomination. Attorney General Josh Shapiro announced his run for governor earlier this year with more than $10 million dollars in the bank to kickstart his campaign. Shapiro has now run and won two statewide races for attorney general, in 2016 and 2020, demonstrating his ability to win votes across party lines while carrying out a legal defense of Pennsylvanians and the commonwealth on issues from predatory lenders to the Big Lie.

Shapiro hand-picked his choice for lieutenant governor, Allegheny County State Representative Austin Davis, who was endorsed with Shapiro by the Pennsylvania Democratic Party in March. Despite the endorsement of Shapiro and the party, Davis faces a primary challenge from Philadelphia State Representative Brian Sims, who has campaigned aggressively for the office.

The races for governor and lieutenant governor are the marquee events of 2022 because it is the last check and balance on a General Assembly that has spent the past few years chasing shadows of the past and promoting conspiracy theories with a legislative agenda rooted largely in contempt of the very people they represent. The governor is the last line of defense keeping Pennsylvania from turning into Florida or Texas.

You can vote early in the Election Office at the Erie County Courthouse during regular business hours, you can drop your mail ballot in the drop box on the front steps of the County Courthouse, or you can go to your polling place on May 17.

I know it's been a heavy couple of years and people need a break from politics, but the stakes remain too high. Don't waste your right to vote. There are 142 Republicans in Harrisburg trying to take it away from you.

Jim Wertz is a contributing editor and Chairman of the Erie County Democratic Party. He can be reached at jWertz@ErieDems.com and you can follow him on Twitter @jim_wertz.