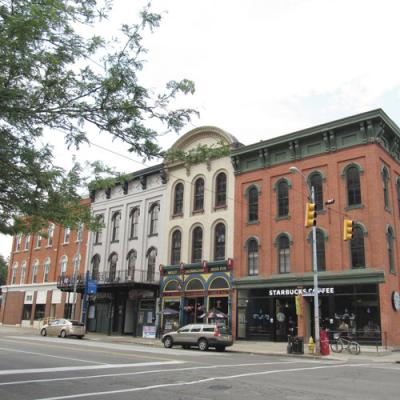 Neighborhoods matter. It's been a recurring theme in this column, and it's a drum that deserves to be beaten, because Erie's neighborhoods will be the cornerstone of a revitalized Erie. Create places to live safely and securely and the necessary pieces for prosperity will begin to fall into place. This is also the ethos of the Neighborhood Resource Organization (NRO), a nonprofit group that grew out of UnifiedErie's Community Action Plan, which was published in 2012.

UnifiedErie was formed in 2010 to reduce crime and violence in Erie County. It utilizes a three-prong approach involving law enforcement, reentry for offenders, and crime prevention.

"The NRO was implemented to address the strategies to combat community disorganization," says Dave Deter, the executive director of NRO. Deter previously facilitated the weed and seed program, which focused on neighborhood revitalization through the City of Erie's Department of Economic and Community Development.

The NRO currently works within the Mercyhurst University Civic Institute, which helps provide funding for the NRO, but it recently moved into its own space in the former St. John The Baptist School on East 27th Street, which also happens to be home of the Sisters of St. Joseph Neighborhood Network (SSJNN) East.

"We came into existence in the same week in June of 2014, and I was familiar with their work in Little Italy. Knowing we were going to be doing what we were doing, we got together and agreed there was an opportunity to work together," Deter says.

Deter now sits on the SSJNN East advisory committee and is assisting in the development of a strategic plan for the SSJNN mission on Erie's east side.

The NRO is taking, what Deter calls, a public health model approach to neighborhood revitalization. It's data driven, not ideological. This approach recognizes that when neighborhoods suffer from unkempt properties, lack of green space, and poor lighting among other social problems, communities become more susceptible to crime and violence.

"We view our job to be providing the neighborhood groups with the information they need to respond to the problems they see," says Deter. "We're not going in with a preconceived notion of 'Here's what your problem is.'"

As a starting point, NRO offers neighborhood groups and community members resources on its website, nroerie.org, including a Neighborhood Safety Toolkit that outlines city codes and ordinances and provides the names of zoning officers tasked with responding to violations.

The toolkit was generated from what neighborhood groups said they needed to address problems in their communities.

"We're actively connecting folks to key partners they need to be successful. It's not happening as fast as I want it to happen," says Deter. "But we need to establish credibility and demonstrate value and when that happens hopefully people will want to get behind us because it's based on research and data, not my opinion or someone else's opinion of what the problem is."