Why I choose Chris Campanelli for sheriff 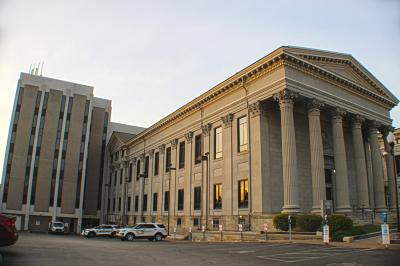 One of the most difficult things for someone to do in exceptional times is to look objectively at the present while reconciling the future they want with the lingering past. It's a challenge in so many areas of our lives that it's easy to get overwhelmed with the prospect of change, and it's easy to get dismayed by the pace. Sometimes it's a slog.

With each passing election, we're left wondering what's in it for us? How will the issues and candidates on the ballot affect our daily lives? For a multitude of reasons, the answers haven't resonated during municipal elections as they should—the odd-numbered years that most people call "off-year" elections, like 2021.

For those of us who engage in a new election every six months, there's no such thing as an "off-year." And in an ideal world, there would be no off-year for voters either. That's because the issues and candidates on the ballot in our odd-year elections have a much bigger impact on our daily lives than those we send to Harrisburg or Washington D.C.

This year, we'll elect a new county executive, and we'll elect and re-elect mayors, council people, township supervisors, school board members, and a host of often forgotten offices such as tax collectors, auditors, and constables in every community in Erie County.

I'll ask as I have asked before in this column, that we — the voters — do our homework to really know the people on your ballot. Sample ballots for every precinct in Erie County are available on the county's website at eriecountypa.gov.. Don't rely on familiar family names or attachments to nostalgic political brands. That's the politics of the past, and most assuredly will keep us tethered to that past, unable to break forward to a new future.

In the first half of the 20th century, that old way of voting could land you a job or a political appointment, or perhaps better treatment when you needed something. But in the first half of the 21st century, that kind of political patronage is all but dead. It's the stuff of legend, forever being chased by the leftover power-brokering wannabes with less to give than they have to gain.

Last year, as we fought to preserve our democracy and wrapped ourselves in (small "d") democratic values, it was also clear that character — for most voters, regardless of party — was the primary issue on the ballot. In that case, the good guys (so to speak) won. But it doesn't end there. For people with their hearts and minds on our future, character will always be on the ballot. We have important choices to make for the future of Erie County.

That's why I'm joining Erie County Sheriff John Loomis in supporting Chris Campanelli for sheriff. I hope you will too.

Mr. Campanelli is a proven leader in the Erie County Sheriff's Department and, he has served as a member of Sheriff Loomis' command staff for the past seven years, demonstrating trust and fidelity that has been the hallmark of his 25-year career. He understands the challenges we face and, as Sheriff Loomis affirms, Mr. Campanelli has the values and the temperament to lead us through challenging times. He's not political. He's just professional.

Mr. Campanelli's primary opponent, Anthony Sanfilippo, was recently discovered to have shared, liked, commented on, and espoused un-Democratic and bigoted sentiments on social media. In posts as recent as last September, Sanfilippo made disparaging remarks about organizations that support the victims of police brutality, and previously he expressed contempt for Presidents Obama and Biden with statements and images, including some of the same Republican symbols seen at the U.S. Capitol on Jan. 6, in multiple posts and as his profile picture. Showing he has not changed in his perspectives, he continued to support anti-Democratic and racist social media posts several times last summer, and right through to Jan. 6 which portrayed the insurrectionists as better behaved than those marching for racial justice. His disdain for the Black Lives Matter movement is crystal clear.

Perhaps most dismaying was the liking of memes that pitted law enforcement against those marching for justice by referring to their "dying homeboys" while the police "finish their coffee." It was a statement shrouded in racism and a profound display of derogatory arrogance toward the existential dilemma we face as a society. Quite frankly, it's the kind of sentiment I have come to expect from Republican candidates. It can't be the public profile of a representative of the Democratic Party, particularly one who wishes to lead our county's law enforcement.

Since these memes and posts were discovered, Mr. Campanelli's opponent issued a public apology on Facebook in which he claims to have moved on from these recently held ideals. But his timing points to a concern for political expediency on his part to salvage his campaign, not of self-awareness and growth. This national cultural moment demands more and so should the people of Erie.

While no one should claim to be perfect, and I certainly don't believe in litmus tests of any kind, Mr. Campanelli has openly acknowledged the injustice of systemic racism and the inherent bias of humans no matter their station in life or political persuasion.

In times like these, in a race like this, and the other options before you, that's a pretty good start toward pushing Erie toward a new politics and realizing the purpose of what Frederick Douglass called "a Government founded upon justice."

Our municipal primary is on May 18. If you're not registered to vote or you would like to vote early, you can do so in Room 112 at the Erie County Courthouse or you can register to vote and apply for a mail ballot at VotesPA.com.

Don't leave your voice out of this important conversation.

Jim Wertz is a Contributing Editor and the chairman of the Erie County Democratic Party. He can be reached at jWertz@ErieReader.com or you can follow him on Twitter @jim_wertz.