Erie at Large: Roaring yet Again

"It is our hope that we contribute positively to the thousands of hardworking small businesses within our region." 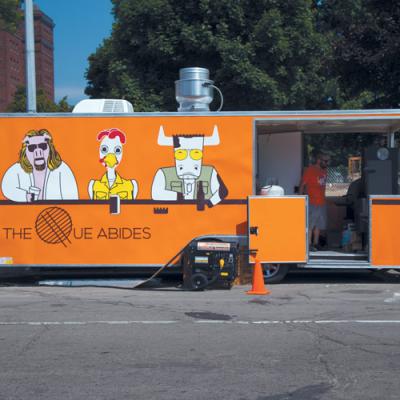 No, this year's Roar on the Shore won't feature a Lovehunter-styled reuniting of David Coverdale and Tawny Kitaen, but it's already shaped up to be all we've ever known of the "Roar": inconvenient traffic patterns, hair bands, and a massive dearth of local vendors inside the hallowed grounds that are Perry Square.

We've tackled this issue before in these very pages.

Tickle's Deli owner Sue Wyant told us in 2014 that her business drops by as much as 50 percent during the weeklong preparations leading up to the region's much vaunted motorcycle rally. "We're small business. Small businesses can't afford this kind of disruption," Wyant said. "This used to just happen during Celebrate Erie because they put the stage down here. Now it's Roar on the Shore and Celebrate Erie, so we lose twice during the year."

Last year, both the footprint and lead time on the event extended, further hampering some downtown businesses. Bar and restaurant owners on State Street told us that despite the volume of people in town, they are lucky to break even on the week. Mike Augustine, the co-owner and chef at Like My Thai, attempted to make up some ground in 2015 by selling chicken on a stick in front of his restaurant.

So it was no surprise that in the first days of June social media already buzzed with talk of ROTS and its "economic impact" on local entrepreneurs.

This year the controversy began when the owner of a local food truck posted on Facebook his disapproval of a single food vendor policy instituted by the Manufacturer and Business Association, which organizes ROTS.

Tim Grow owns and operates The Que Abides, a Big Lebowski-themed food truck that specializes in barbecue and is ever present downtown, usually within blocks of Perry Square: ground zero for ROTS. But when the Roar comes to town, local food vendors are no longer welcome because the Manufacturer and Business Association contracts for and with a single source food vendor from out of town. Last year, the contract went to Seivers Concessions based in Grove City, Pa.

Having a single source food vendor makes sense. But for an event that purportedly prides itself on its boon to the local economy, the financial loss for some local vendors and businesses doesn't add up.

Vendors and event organizers from outside the ROTS ecosystem say that this is common practice among organizers and promoters, when possible. Having a single source food vendor makes sense because it limits the logistical chaos of recruiting, placing, and managing multiple vendors that would share the same space as a single source vendor.

But for an event that purportedly prides itself on its boon to the local economy, the financial loss for some local vendors and businesses doesn't add up.

Grow's concern is that he already paid for a vendor license and parking pass that allows him to park in public parking spaces that are typically metered. But once the fence is erected downtown to mark the boundaries of ROTS, he needs to stake out new real estate.

Grow says he contacted the Manufacturer and Business Association last year about working ROTS, but received no response. This year he visited the Roar on the Shore website only to find a "No Food Vendors" addendum to its vendor information page.

The public support for Grow and other local vendors went "Erie-viral" and eventually garnered the attention of local media outlets. Lilly Broadcasting shared The Que Abides story on June 1.

ROTS officials had not responded to Lilly Broadcasting's request for comment at the time of its report just as they ignored Erie Reader requests for comment in 2014 and 2015. But on June 2, they offered an "official statement" on the event Facebook page.

In its statement, the Manufacturer and Business Association addressed many of the questions raised on social media, including its restriction of local vendors at ROTS. "We don't restrict local vendors, and we never have," the statement reads.

If this were a PolitiFact meter, we would rate the statement as "somewhat true." Last year, Erie Reader found a few local clothing and novelty vendors, but premiere products and services, such as official screen printing, tattoo artists, and even the ROTS wine, were all from out of town. Restricted? No. Encouraged? It didn't seem so.

ROTS officials qualify – "approve" – vendors that apply to participate in the event. Vending spaces range from $450 for 100 square feet to $2,750 for 2,400 square feet. But that doesn't include food vendors.

To become a qualified food vendor, you'd need to meet several criteria including an itemized list of food and prices, which event organizers reserve the right to approve; a detailed service plan that includes the number of personnel on site; letters of reference and proof of $1 million insurance for the event. That's all standard fare. Food vendors meet the same requirements for Sturgis Motorcycle Rally, Rolling Thunder in Washington, DC, and every other biker rally that ROTS emulates.

But at these major rallies, exclusivity doesn't appear to be on the menu.

The fact is that for all of the local vendors we have, it's likely that none of them would be able to serve as a single source food vendor for ROTS. Collectively, the region's local food trucks and restaurants would be able to pull off such a feat, although none of them is large enough to meet the burden of the event by itself.

Nevertheless, the official statement asserts that "local vendors are encouraged to apply to serve as the single source vendor for Roar on the Shore … In the past 10 years, no local vendor has ever applied."

Again, our PolitiFact meter would rate this, at-best, true-ish.

For the past 10 years, the vendor page on the ROTS website has simply read "No Food Vendors," just as it did up to June 1. It didn't link to an application or include the qualifications a vendor would need to meet in order to become the next ROTS single source food vendor. It was hardly an invitation to participate. The vendor page was updated and the vendor qualifications added on June 2, only after the organization began to receive significant public criticism and just before it released its official statement on Facebook.

The interest of ROTS has been its organizers' only concern. ROTS and the Manufacturer and Business Association continue to grow and reap the benefits of its success without consideration for its impact on those who make their living downtown the other 360 days each year.

Now, we're trying to avoid a tragedy of the commons that's all too familiar in the wake of Blue Ocean business strategies.

A week of lost or diminished wages can cripple the small businesses and startup ventures that have begun to dot Erie's downtown over the past few years. They should be supported, rather than asked to step aside during Erie's "premiere event."

But the bottom line is this: Even though its reported $25 million in economic impact is grossly overstated and we've got no real accounting of dollars spent locally, Roar on the Shore has made significant contributions to local non-profit organizations with proceeds from the event. For that they should be recognized. However, the community concerns about the interest of local entrepreneurs should not be dismissed.

If local vendors are not to be included in Perry Square alongside major concessionaires, should they not have a presence elsewhere within the footprint of the event? A week of lost or diminished wages can cripple the small businesses and startup ventures that have begun to dot Erie's downtown over the past few years. They should be supported, rather than asked to step aside during Erie's "premiere event."

"It is our hope that we contribute positively to the thousands of hardworking small businesses within our region," concludes the Manufacturer and Business Association statement.

Well, what do you know? That's our hope, too.