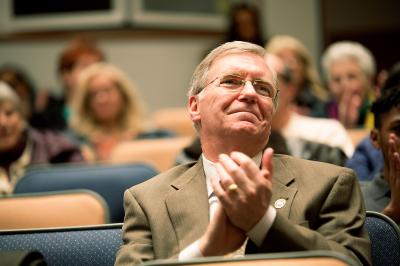 Maitham Basha-Agha
Erie Mayor Joe Schember should be applauded for being a more visible presence in the community, but before he earns a standing ovation, major questions regarding our most distressed neighborhoods must be addressed.

For the past few months, Erie Mayor Joe Schember and company have been making the rounds at community forums to carry out a campaign promise that his administration would engage the public in conversations about the future of Erie, specifically as those conversations and his administration's plans relate to Erie Refocused, the city's comprehensive plan.

Schember's predecessor, Joe Sinnott, under whose watch Erie Refocused was procured and shelved, showed little interest in making that plan part of a community dialogue. As a result of that approach, many who trade stock in public interest and engagement surrendered their faith in the office of the mayor and Erie Refocused equally.

Schember, for his part, has been a model of transparency. He's begun to hold weekly press conferences, he's hired a digital media director who has moved the city into the middle of the last decade with Twitter and Facebook accounts — noted with peace and love since this is a wildly awkward advancement in 2018 — and he's kept a social schedule that would be laudable for a mayor half his age.

Given these cultural changes in City Hall, the efforts to restore public trust in both the office and the plan itself is not an insurmountable task. Since January, the component parts of the mayor's office have been in a state of constant motion to remind the public that the lights are on and someone is, indeed, home. That includes outreach beyond Erie Refocused.

Since the beginning of March, the mayor's engagement has included a tag-team with Erie's Public Schools, which are in the midst of strategic planning that is expected to conclude this June. This collaboration is relatively novel in Erie's recent history, and it is also necessary. The demographic trends — social and economic — are parallel with the ones facing the city. If they don't move in concert, both will surely fail.

More than 80 people attended one of these joint sessions at the JFK Center on Buffalo Road on April 24. There were residents representing several corners of the city, as well as the top leadership from a variety of community organizations. However, the most active participants during the Erie Schools forum were public school students, as it should be. They raised concerns about being college-and-career-ready, and their need to be directed on the best paths to get there. These students recognize that there is no one-size-fits-all approach to their success or the success of their school district.

It's a lesson that city officials would be wise to heed.

That's because several of the attendees I spoke with following the meeting voiced concern that the city's presentation didn't address the direct impact on the neighborhood in attendance.

The presentation at the JFK Center, according to those who had attended previous sessions on Erie's west side, was the standard overview of the East and West Bayfront neighborhoods where restoration plans are already in place and being carried out by the Bayfront East Side Taskforce and Our West Bayfront. These organizations have corporate support that enables them to address blight and economic stress in considerably more proactive ways. Neither of those plans — nor the city's presentation of Erie Refocused — addressed the future of southeast Erie, where the community meeting was held.

Many of the people at that meeting — including those public school students — were waiting to hear what it means for them that much of their neighborhood had been classified as beyond repair within the context of Erie Refocused. The report labeled homes — and in some cases entire neighborhoods — with a color coding system of green, yellow and red. Green is positive, yellow areas should be targeted for improvement to mitigate decline, and those marked in red are the hardest hit and, therefore, the most difficult and expensive to repair. Many of the attendees at the JFK center, whether east-siders or west-siders, live in neighborhoods with substantial tracts of red. Does that mean that the city will do nothing to address blight and abandonment where they live? How long will it take for progress in downtown Erie to reach them? Will it ever come?

Questions like these permeate meetings like the one held April 24. Unfortunately, the successes and impending success of the East and West Bayfronts do not come close to providing answers.

The mayor's office deserves credit for promoting the possibility of action to come from City Hall. At this point in time, a majority of city residents would agree that the mayor does seem to have new clothes. But if he spends more time talking than listening, one of the students in the audience is likely to question whether anything has changed at all.