Erie At Large: The Year of the Gun

In case you slept through 2014, we have a gun problem. Now, let's address it. 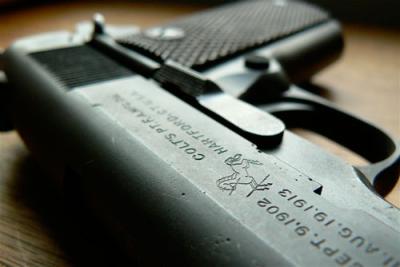 Many people who live in the city love their neighborhood. It becomes part of the individual and collective identity of the community and its residents.

Coming of age in a particular neighborhood is like knowing a secret handshake or speaking a foreign language when you meet someone who is also from that part of town.

Growing up in Little Italy or the lower East Side is how many Erie natives would prefer to be identified, instead of simply saying, "I'm from Erie."

But neighborhood fealty is also at the heart of our city's gun problem.

In case you slept through 2014, we have a gun problem.

The Erie Police Department received more than four-hundred calls for shots fired this year. There were more than sixty gun-related injuries.

The shooting death of Jaree Warren near the corner of 18th and Raspberry streets brought the city's 2014 homicide count to eleven. Ten of those were homicides by gun.

The investigation into the Warren murder is ongoing, but it's likely that Warren knew his assailant.

"The majority of all the shootings we see are not random acts of violence. They are not random victims. They all know each other," says Erie Police Dept. deputy chief of administration Don Dacus.

Whatever the root, it's killing our city.

Don't get me wrong. Erie is, for all intents and purposes, a safe city. But a laissez-faire attitude toward insidious acts of violence will quickly become the defining characteristic by which our neighborhoods, and eventually our city, are measured.

Since 2004, the City of Erie has experienced a steady increase in violent crime, each year exceeding the overall national average.

Erie ranked ninth in violent crimes in Pennsylvania last year, according to the FBI's uniform crime reporting statistics. In contrast, we had nearly half the violent crime of Reading, Pa. and less violent crime than Lancaster, two cities with smaller populations and bigger problems – high rates of drug addiction, low employment rates, and gang violence – than those we experience in Erie.

So while there is reason to be optimistic heading into 2015, it seems important to talk about the problems that exist in our neighborhoods because much of the violent crime and almost all of the gun violence in the city is territorial in nature.

Wannabes from the lower East Side end up at odds with a disparate band of thugs from the upper East Side or the West Side of town and the powder keg has been lit. Soon everyone's taking matters into their own hands and meting out their own forms of justice.

"They're pretty much groups of neighborhood friends who have banded together based on geographic location," says Dacus. "A lot of it starts with one of them getting shot or shot at, which causes this to escalate and continue where the only sense of justice for them is to shoot at or shoot one of their opposing neighborhood enemies that they've created."

The problem is, there's no justice in street justice. It becomes a self-fulfilling prophecy by which the subjective execution of one inevitably leads to an objectiveless war of many.

In some respects Erie is experiencing, on a micro scale, the type of crime that plagues larger cities across the United States. Territorial disputes are nothing new in episodes of crime and violence, but there's usually a hierarchy or someone with whom authorities can reestablish sensible lines of communication. Erie lacks that type of organized crime.

This puts greater value on the role of neighborhood alliances and community leaders who understand the problems unique to a neighborhood, a block, or even a single home.

An honest discussion between citizens, elected officials, and the police who are charged with regulating violent crime, begins the process of eradicating, not managing, the problem.

2014 may go into the books as the year when gun violence and petty quarrels overshadowed the better nature of our city.

2015 should be the year we figure out what went wrong.