For both the seasoned collector and the novice, vinyl holiday celebrates the art of making music. 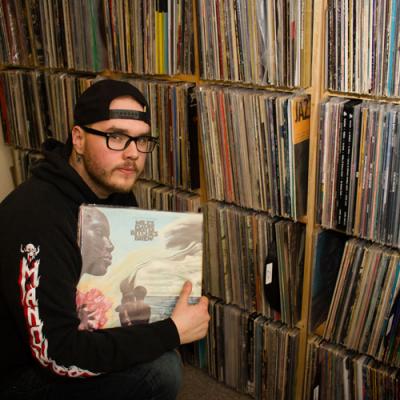 It is safe to say that when we grow up, we acquire a hobby, a collection, or some type of activity that becomes a defining factor in our lives. For some of us, it is different era coins or wartime memorabilia, but for others, it is the hard-pressed vinyl emitting measures of harmonious vibrations as it spins softly on a turntable.

The latter is the case for Joshua Buck, a 30-year-old Erie native who sang in the old local hardcore band, Taste The Steel. "Records run my life," says Josh, as he sifts through his mountainous wall of vinyls, looking for the right album to play. The collection of approximately 5,000 records, comprised of 45s (or 7-inch fine-grooved vinyls) and classic LPs (Long Plays, 33 rpm microgroove records), towers over Josh as he explains, "This is a part of me. Hardcore music – music, in general – changed my life, and everyday I get to find a new band or new style to enjoy."

After a moment of focused attention on his monolithic wall, he happens upon a record of a fairly old Erie punk band. He gently puts on the My 3 Scum record and begins to talk about an upcoming event on April 19 that epitomizes everything a record collector truly loves.

Record Store Day is a central movement of independent record store owners and employees who want to celebrate the culture of collectors, appreciators, and lovers of music in a different format. It is a day where people – employees, owners, customers – come together to discover new music, people, and experiences. Essentially, thousands of independently owned record stores all over the world open their doors to the public on the same day to offer discounts, hard to find material, and unique records, and bands and musicians often release exclusive and limited material to participating shops.

This vinyl enthusiasts' holiday will be celebrating its seventh birthday this year on April 19, but the holiday and celebration began as an attempt to revitalize the public's interest in small record shops, instead of the behemoth corporations that mass market and undercut independent businesses. Now, seven years later, it has taken on a global presence, developed ties with big music labels.

It has done much for the musicians as well, giving them a nuanced conduit to share their music. Record Store Day helped Metallica reconnect with fans by releasing exclusive material after the copyright debacle in 2008, and gave bands like Mumford and Sons, Broken Bells, and Cage the Elephant a chance at a global market. Bands, and their music, that make the exclusive list of releases are chosen by the founders of Record Store Day, as well as some other prominent store owners. They are not biased by label deals or dictated by popularity; if the band is believed to offer good music, it gets a slot on the website and access to a huge market.

With My 3 Scum spinning in the background, Josh reflects on his many adventures to various record stores on past Record Store Days. "You are cramped and pushed around, and have to fight to look through hot sections," he laughs. "Then you have to wait in long lines to cash out, but the digging and finding – the experiences you have while surrounded by people just like you is what makes it."

Record Store Day, Josh explains, gives a platform for people to completely change their lives. "Every time I am out, I meet new people, and they offer me something and I offer them something, and by the end of it, I know I opened their mind and left a permanent impression. I opened the door for that person to that band," he says.

In addition to Record Store Day, another event that is celebrating the vinyl disc of the engineered analog sound is the Rustbelt Record Swap on Saturday, May 17 at the King's Rook Club. It will be hosted by Matt Texter, a local musician and record lover, and is open to the public for people to sell and trade records, while also enjoying some live music. Josh will also be there selling collections of 45s.

The sounds coming out of the system decrescendo and become a soft hum as the needle skips to the silent center of the record. Josh, already promptly looking for another gem to play, expresses how excited he is for the upcoming Record Store Day.

"I think now that more people know about it, the more fun it will be for not only me, but for the guys who own the shops," he says.

"There is something about going to a dusty record store, sifting through their huge collection, and finding one beautiful piece of artwork – because that is what each cover is, artwork – hugging a disc of rubber that sticks out to you," he continues. "Then you have to pull the record out of the jacket, make sure it isn't dusty, clean it, place it on the platter, and drop the needle – and then just listen and be immersed in the sounds coming out. That is an experience, an intimate one. You can't do that with an iPod or a laptop. Sometimes you just need to sit down, put on a record and become engulfed in the sound."