1,585 new cases reported over the last week with no new deaths today 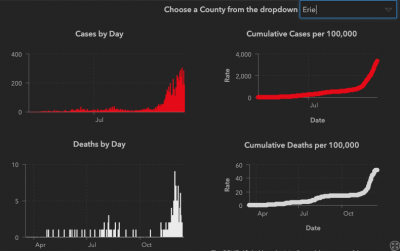 There were no new deaths reported in the last 24 hours. There have, however, been 35 deaths in the last week, which account for one-fifth of the cumulative total of deaths in Erie County occurring this week alone, for an average of five deaths per day.

According to the county, there have been 1,585 new positive cases in the past week (17.6% of our total cases), with an average of over 226 cases being reported each day.

The number of new cases reported during the last two weeks account for more than 35.7% of Erie County's cumulative total.

There have been 100 or more new cases reported each day from Nov. 11 onward.

There have been 170 total Erie County deaths reported by the National Electronic Disease Surveillance System (NEDSS), with 53 deaths occurring in this week.

According to the PA Department of Health, there are 138 patients hospitalized with COVID-19 and 13 patients on ventilators.

For the first time in several weeks, there was not a record number of cases reported in a single day this week, though Saturday's total of 287 stands as Erie County's second-highest number.

Christopher C. Clark, AHN Saint Vincent Hospital President and CEO, DO, MHA Joined Dahlkemper's video conference, and reported a 40% positivity rate this month, up 10 percent from last month. Clark stated that AHN is expecting their shipment of the Pfizer vaccine tomorrow on Thursday, Dec. 17. Administration of the two-shot series will be targeted to their frontline workers. "As supplies increasingly become available, and per regulatory guidelines, AHN will be pleased to offer vaccinations to our patients sometime in the future," Clark explained.

In this week alone, Pennsylvania has seen 3,703 deaths, more than 28% of the total amount of deaths since the onset of the pandemic. 1,292 were reported last week, with 630 the previous week.

Warren County has 888 total positive cases (up 258), and six deaths (up four this week, tripling their previous count).

Ashtabula County's cumulative total is 3,299 positive cases (up 233 this week) and 65 deaths (up eight this week).