Erie's Inclusive Growth: A Playbook for Action provides menu for $1.1 billion of investment strategies and projects 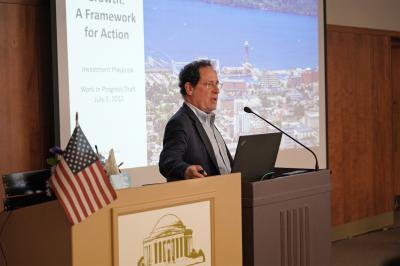 Photos by Chris Carroll
Bruce Katz (above) and Kim Thomas (below) are spearheading Erie's Inclusive Growth: A Playbook for Action, which aims to accelerate Erie's pandemic-disrupted renaissance by directing federal funding to the right projects.

To better know what something is, sometimes it is best to first understand what it is not. In the case of Erie's Inclusive Growth: A Playbook for Action, it is important to recognize it is not another plan.

Bruce Katz and Kim Thomas are each quick to make that point to me on separate Zoom call interviews. Both are well-positioned to know what Erie's "Playbook" both is and can be. And knowing the who behind it and in front of it helps to comprehend both the what and the what-comes-next.

Katz is the founding director of The New Localism Advisors. He is the playbook's architect, along with Florian Schalliol.

Thomas has been hired to direct the investment playbook's "Nerve Center" — a distinctive feature of both the present and future of the playbook, which will provide, as the playbook notes, "day-to-day support to the entities implementing the projects of the Playbook." That is, moving forward from its announcement, there is already infrastructure in place to get identified projects moving along.

Neither Katz nor Thomas are strangers to Erie or this work.

Thomas has worked in media, government, and economic development in Erie. Before heading up the Nerve Center, she served as the director of the Pennsylvania Department of Community and Economic Development's northwest region office, which includes Erie and 12 other counties, for over seven years.

Katz first arrived in Erie to present at the Jefferson Educational Society's Global Summit in 2014, discussing his widely praised book "The Metropolitan Revolution," which showcased cities and their successes and the people there driving progress. Katz has remained engaged with Erie over the years, consulting on various projects and ideas, and appearing at additional Global Summits.

For years, a Katzian mantra had been: The federal government is not coming to save you. Or, in other words, towns and cities control their own destinies, and progress happens — or does not — at the local level.

At the onset of the global pandemic, Katz asked me to help write an early response to the U.S. federal government's early actions — or inactions — in the wake of a once-in-a-century global crisis. First and foremost, COVID-19 was a global public health crisis. But it was also crippling businesses and creating an economic crisis. In late March 2020, we made the case for why we believed Erie's downtown was "a Proxy for the Nation," arguing that a renaissance a decade in the making ran the risk of being stunted, or, worse, undone, without purposeful immediate government intervention at the federal level — and that many other towns and cities now faced similar situations to Erie's.

The pandemic has, indeed, prompted an unprecedented flow of federal dollars. Beginning during the Trump administration and continuing into the Biden White House, the federal government is deploying trillions of dollars to communities nationwide.

Katz commonly likens the dispersing of funds to a fire hose.

But you don't flood your whole house if only the kitchen and dining room are on fire. This new playbook positions Erie to turn talk — ideas, dreams, wishes, plans — more quickly to action, and action to revitalizing results — a renaissance restored, a better Erie for all by directing the stream of dollars at specific projects.

Erie, like many places, has an archive of plans. Some drill down at the municipal level. Others are scaled to countywide and regional levels. Some are just a few years old. Others drafted decades ago still have relevance today.

Unlike other cities and towns, Erie now has a playbook. The list of those that do is short.

The New Localism Associates and the Nowak Metro Finance Lab at Drexel University, so far, have created investment playbook toolkits for the downtown of Dayton, Ohio; a health innovation corridor in El Paso; and disadvantaged commercial corridors in Buffalo,  Philadelphia, Pittsburgh, and Greensboro, N.C. Next up: the downtown of San Bernardino in the Inland Empire region in Southern California.

"What we have in Erie is a portfolio of real projects," Katz told me. "It is tangible projects that are costed out, that can raise capital from federal programs, from the state, and from banks, from CDFIs (Community Development Financial Institutions), and from investors."

Those projects came from studying and reviewing 12 of Erie's past and current plans, and from interviewing some 50 community stakeholders. What's emerged is Erie's playbook, which serves as a "living document."

Think of this as a restaurant with a menu. Thanks to the internet and social media, most restaurants have the ability to advertise their menus to prospective diners before they decide whether to sit down. The menu lists what is served — and by extension, what is not. Diners might be able to modify some dishes — Hold the tomatoes! Add some relish! — while others might come out as-is (you can't take the chocolate out of chocolate ice cream).

With the menu comes the ability to say more than just "we serve food." Erie, through its playbook, expresses: Here is where we will invest money, how much it will cost, why it matters, and how it stands to improve our community.

To unpack and review the entire menu/playbook is an important thing to do, but not something we will do in-depth here. The living document lives on the  Nonprofit Partnership's website, and should be something anyone who cares about Erie's present circumstances and wants a say in its future should review.

Briefly reviewing Erie's menu — err, its playbook — you will find 35 projects that build on identified strengths to address identified weaknesses, focusing on specific types of investments at a total cost of $1.1 billion. They are both cross-cutting and place-based.

Cross-cutting projects focus on county and regional investment strategies. They focus on how to accelerate local infrastructure and quality of life investments; build new clusters of industries in plastics, recycling, advanced manufacturing, and the blue economy; and grow Erie's entrepreneurship through new businesses, especially minority-owned ones.

The place-based projects emphasize investment strategies in the downtown, the bayfront, the 12th Street corridor, and various neighborhoods in Erie's "Greater Core." The argument for targeting Erie's Greater Core is that despite accounting for just 21 percent of the land area of the city of Erie and less than 1 percent of Erie County, the "Greater Core" accounts for one-third of all income earned countywide.

To those who might say that Erie's 35 projects read like a Cheesecake Factory "everything but the kitchen sink" menu, if we're pushing the restaurant analogy as far as it might go, Katz told me "35 projects may not be enough."

To Katz, the magnitude of the moment matters. It is not every day, or every year, or even every 25 years that the federal government does what it is doing.

"Here's the moment to rise to the occasion, build the capacity in the public and private sectors, the civic community, and get these projects done if you want your community to really have a leapfrog effect," Katz said. "So, this is really your choice." 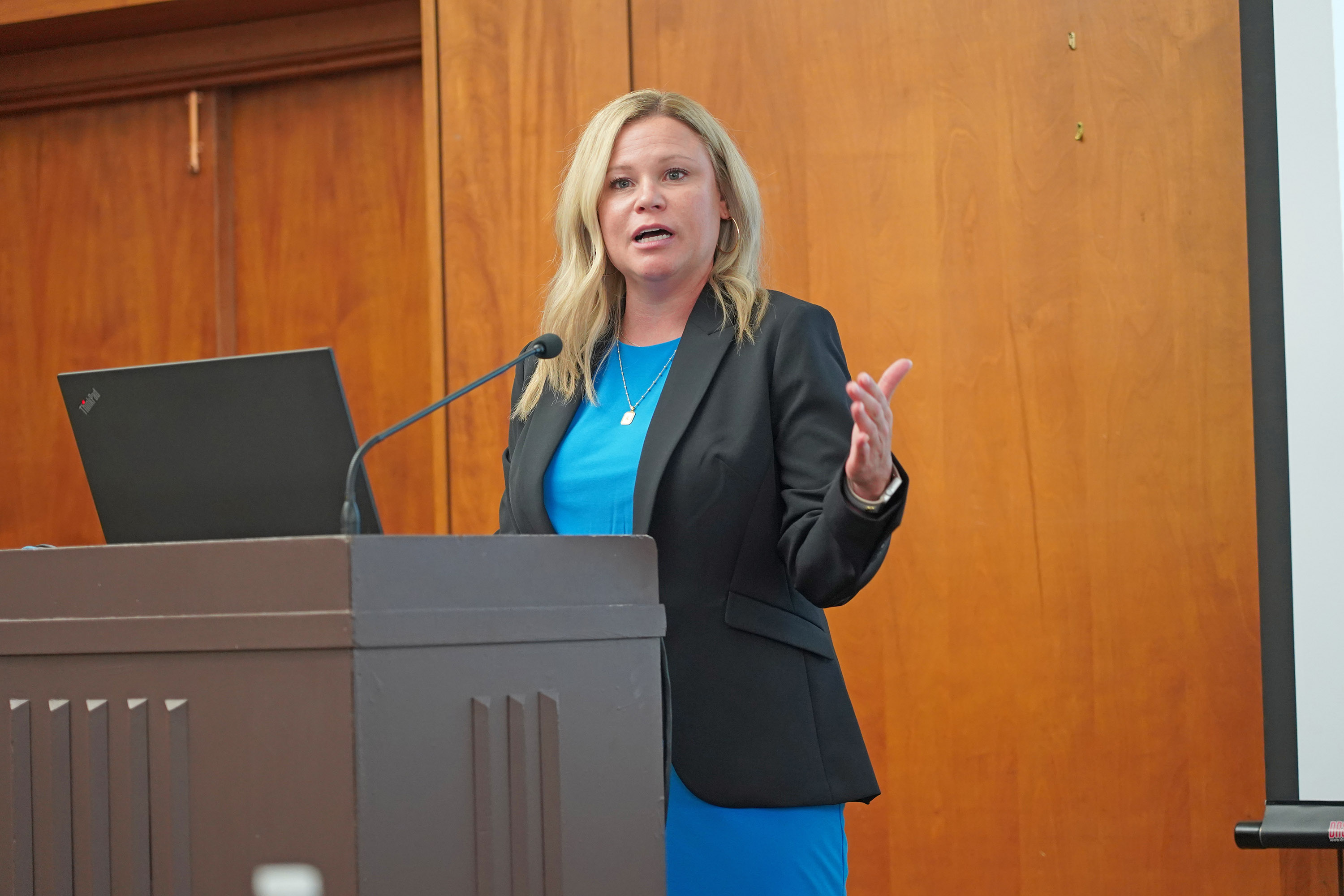 Choice can be seen in Erie's playbook being a "living document." This is where Kim Thomas, and others, come in.

"This is a living document, because it is not every project that there currently is, or that there will be, as we continue to implement this moving forward," Thomas told me. "This was created with a bias toward action."

That action means having projects now fit to investments the federal government has already identified. But it also means, in restaurant-speak, being able to update the menu as the seasons change, and as the public has time to offer more input (maybe don't hold the tomatoes! In addition to chocolate ice cream, can we add pie?).

The steering committee and Thomas are developing the third element in the playbook's structure: Delivery Teams. These teams will conduct additional research and planning for exploratory projects from the playbook. Because the work is ongoing, the community's input will breathe life into the playbook's future.

"This playbook is Erie organizing for success, it's organizing for a once-in-a-lifetime opportunity to bring a disproportionate amount of investment to the people who live and work here," Thomas said. "It's our time. I've asked people along the way, as we've been launching this, to believe that Erie can be successful in this, to believe that Erie can be a poster child for a positive movement. This is our opportunity. The federal government is releasing trillions of dollars. Why can't we bring a significant amount of that here like we never have before?"

Those questions — and which projects move forward, which new ones are added — are already playing out, and will continue to play out, in Erie. How they are answered, and when, depend on who sits down at the table. Right now, reservations are open.

And with Erie being among the first places to organize such a document, and to take action on it, other people in other places will likely look to Northwestern Pennsylvania to see that this is the model for the day. Will the Erie recipe for success be franchised? All of the key ingredients are there.

Ben Speggen can be reached at bSpeggen@ErieReader.com and you can follow him on Twitter @BenSpeggen. For the record, the author was among the stakeholders interviewed by The New Localism Associates.