Erie Micro Brew Fest in a Can 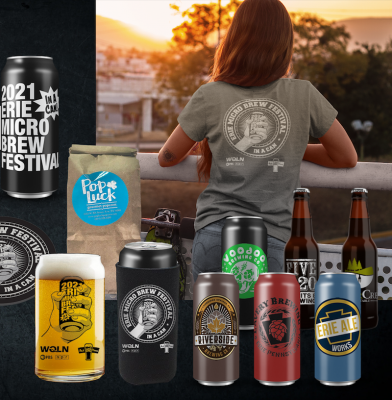 Due to unforeseen circumstances, last year's Erie Micro Brew Fest — one of the region's oldest and largest craft brewing festivals and WQLN PBS NPR's biggest annual fundraiser — was disappointingly canned. In 2021, however, it is the Brewerie at Union Station and its Lake Erie Ale Trail partners who will be doing the canning, bundling their potent potables into a compelling compilation sure to please.

All you need to do is to lager onto eriebrewfest.com and reserve your Erie Micro Brew Fest In A Can Party Box between now and April 6 to beer a part of the action. You'll then pick up your Party Box at the Brewerie on Saturday, April 10, to be enjoyed domestically in the comfort of your home. Each Party Box costs $50 and includes the following:

T-shirts will only be included with the package through March 15 — afterwards, they can be purchased separately for $12 apiece.

Brewerie owner Chris Sirianni won't divulge much about the much-anticipated "Brew Fest In A Can" limited release, other than it is something "very unique" and "never made before" — and "may never be made again." Aside from Erie's Best Donut (variety unknown), he hinted that it will be brewed with other local flavors (such as maple syrup). The most obvious conclusion is that it will be some sort of (coffee?) stout, but Sirianni also used the adjectives "fresh, fruity, and a lot of fun," so who knows what the Fuggles is going on.

In any case, supplies are limited, so if you don't hop to it you just malt be out of luck.

Matt Swanseger just heard you break your beer bottle against the countertop after exceeding his usual per-article ale-lotment of puns. He's hiding in a protective full-body koozie at mswanseger@eriereader.com