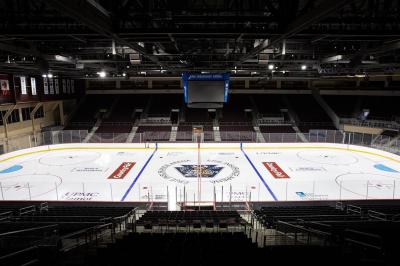 The long intermission between Erie Otters home games is finally coming to an end. This Saturday, 595 days since last hosting a regular season game at Erie Insurance Arena, the Otters will lace 'em up against the visiting Saginaw Spirit.

Ontario Hockey League (OHL) administrators spent what would've been the entire 2020-21 season on the proverbial Zamboni, trying to smooth out the pits and gouges the pandemic left in their plans. Now, with 83 percent of eligible Ontarians fully vaccinated and the U.S. border set to reopen to Candians for non-essential purposes next month, a level playing surface has finally been attained.

For the time being, the three American OHL clubs in Erie, Saginaw (Mich.), and Flint (Mich.) have been playing one another exclusively. The Otters dropped their initial two contests in Flint against the Firebirds and split with the Spirit last weekend, skating into their 2021-22 home opener with a record of 1-3. They will face off a second time against Saginaw on Sunday afternoon before taking on Flint twice next weekend, all at Erie Insurance Arena.

By month's end, the Otters will have completed eight of the 68 games on their 2021-22 schedule, with most of their November slated to be spent in Canada. The OHL is following a similar setup to the NHL this season, with geographic proximity taking precedence over traditional divisional alignments in the balance of the schedule. The Otters will play just 20 games against their Midwest Division rivals, while squaring off against the West Division 36 times for a total of 56 games. They'll take on Eastern Conference opponents Niagara and Hamilton six times apiece (as these Ontarian cities are only about 120 miles and 160 miles apart from Erie, respectively) — the other constituents of the Central and East divisions the Otters will not play at all due to the logistical considerations.

All told, Erie Insurance Arena will host 34 games this season — four this month, three in November, four in December, eight in January, six in February, seven in March, and two in April.

It's not our place to tell you where you Otter be this weekend, but this has the makings of a strong power play opportunity.