Erie Philharmonic Conductor Daniel Meyer to Stay on Until 2022 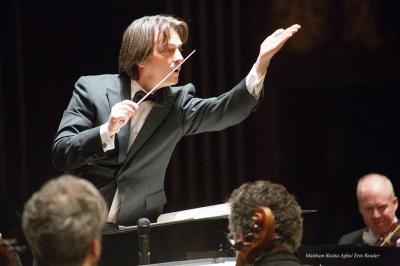 Erie Philharmonic Music Director and Conductor Daniel Meyer announced on June 13 he will stay on and lead the orchestra for another four years.

At 21 La Rue Dix on 21 West 10th Street in Erie, community members, along with Erie Phil Board President W. John Knox and Mayor Joe Schember met during a news conference.

Before coming to Erie, Meyer held an assistant conductorship in Knoxville Tennessee and a residency in Pittsburgh among multiple guest conductorships across the country and Europe.

In an interview last year with Reader Editor Matt Swanseger, Meyer disclosed that his favorite part about audiences in Erie was "their willingness to experiment, to accept and enjoy the music we've decided to play them. We've built a degree of trust that when we take the stage, we believe in the music we're playing, that it has something to say, on an emotional, intellectual, or, at best, spiritual level, where you're lifted out of your seat and transported to some other realm."

Starting in 2007 – and not ready to pass the baton quite yet – Meyer has been serving as the music director for over a decade. After his contract ends in 2022, he will become the longest serving music director in the Philharmonic's 105-year history, besting Walter Hendl's tenure from 1976 to 1990.