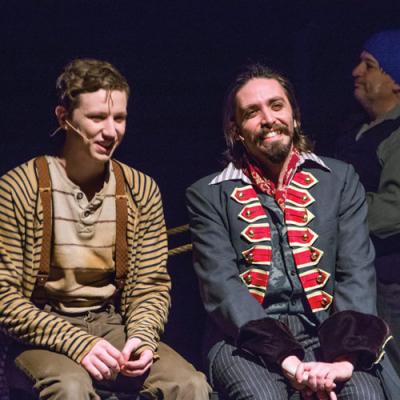 Harry B. Vincent would be very proud. Vincent, founder and driving force behind the creation of what was then called the Little Theatre, debuted his players on the evening of January 18, 1916. He always had the highest hopes for his company, but he still might be amazed that his theatre's descendent, the Erie Playhouse, is marking its centennial year.

Playhouse staff, volunteers, and patrons honored the anniversary earlier this year, but they are pulling out all the stops during the 2016-2017 season to celebrate this milestone. Besides the usual presentation of top-notch productions, a variety of special events are on tap.

They have every reason to be proud and commemorate their accomplishments. The Playhouse is one of the oldest community theatres in the nation. And earlier this year, it was voted the state's best community theatre in the Pennsylvania Theatre Guide's Best of 2015 Readers' Choice Awards.

The cohesive organization in existence today is the result of many people with vision and the drive to keep the theatre going. "We are grateful to everyone who came before us and has brought us to this point, says Executive Director Almi Clerkin. "Whatever challenges the Erie Playhouse faced in the past century, we've made it through."

Some of those challenges were daunting. Two world wars kept the stage dark from 1918 to 1919 and 1942 to 1946. In the 1960s, the permanent home on West Seventh Street had to be sold to Gannon University for financial reasons, leaving vagabond troupes to make their way from one rented space to another. The Playhouse finally found a truly permanent home in the former Strand Theatre on West 10th Street in 1983, where it planted deep roots.

Some of the high points along the way include the leadership of talented directors and managers such as Newell Tarrant, Bill Cohen, and David Matthews.

Matthews' tenure ran from 1962 (as the business manager for 10 years) through 2006, when he retired as managing director after 34 years at the helm. He oversaw some of the lean years with no home and few resources; but he also led the way when they settled into their current facility.

Today, the Playhouse has 12 full-time and five part-time staff members, and a budget from Harry Vincent's dreams. It offers seven mainstage productions as well as concerts and other special events. The vibrant Youththeatre program stages three full productions a season, engaging children and their parents from the community, and the recently created Playtime program, a collaboration with the United Way and the Imagination Library, brings books to life with art and drama for children ages two to five at more than five social service agencies in the area. In addition, the organization collaborates with the Erie Philharmonic and the Erie Times-News in a program making it possible for all fifth graders in the city schools to attend a concert and a play.

If you want to help the Playhouse celebrate, there are ample opportunities. One of them might not be the sold-out gala and tribute concert slated for Sept. 17, unless you already have your ticket. But more occasions to suit every interest are available.

You might like a New Year's Eve party celebrating 100 years of Broadway, two Princess Balls on March 26 and April 2 to open the always-sold-out day of imagination for more of the under-10 set, and a Launch Party on April 26, where the shows for the 2017-2018 season will be announced.

One special evening will be Jan. 18, 2017, when the Playhouse will reenact the very first evening of the theatre's history by staging the three one-act plays originally performed: Sunset, I'm Going, and Galatea of the Toy Shop. The location of this performance has yet to be determined, but the hope is that it will "take the Playhouse back to its roots," says Clerkin.

An internal project – something for the actors' own satisfaction – will be entering a production in the American Association of Community Theatre's AACTFest competition. They will be performing The Glorious Ones in Williamsport, Pennsylvania in the state contest in March of 2017. A win there would send them to a regional challenge and, if victorious, they will move on to the national festival in Rochester, Minnesota.

"The Playhouse has only entered one of these contests before and won the state title," says Clerkin. "We will be focused on the state competition only and see where it goes from there." The community is invited to view this play in early March when the Playhouse stages it at the Schuster Theatre in preparation for the Williamsport performance. 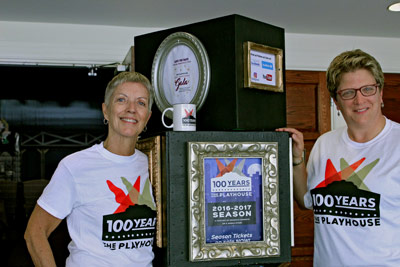 The anniversary celebration culminates in a weekend-long Playhouse Family Reunion commencing on Friday, July 28 with a concert by the Boston-based band Uro, a street fair for the entire community on Saturday during the day, followed that evening by what's being called a Concert Extravaganza in which performers from the past, present, and future will perform songs celebrating 100 years of the Playhouse. The final reunion event is a Sunday brunch where Youththeatre alumni will be honored, and possibilities for the next 100 years will be explored.

It is the next century that is on the mind of many Playhouse staff and supporters. Clerkin plans to retire next year, and so does Marketing and Special Events Director Sue Lechner. Both are ready to hand off the care of their beloved theatre to the next generation.

"The Playhouse is always evolving," remarks Lechner. "With all the new social media outlets available and new ways for outreach, the young leaders need to step forward."

The Playhouse Board of Directors also has ambitious goals for sustaining the theatre and its facilities. Currently underway is a $1.4 million fundraising campaign to upgrade the "back of the house." Plans are for a new curtain and rigging, the installation of an ADA-compliant bathroom on the stage level to accommodate actors with disabilities, sinking the orchestra pit, and installing a proscenium lift if funding allows. Monies will also be used to replace the heating, ventilation, and air conditioning system remaining from the 1940s.

Planning for the future also means nourishing the Playhouse's endowment, the organization's financial foundation. Rather than seek out large gifts for this $1 million campaign, the Playhouse is launching a grassroots effort allowing anyone to make smaller gifts. Their goal is to receive 10,000 gifts of $100 each.

"We've always had many loyal supporters," explains Clerkin. "This campaign will allow so many friends of the organization to own a part of the Playhouse's future."

Playhouse staff and volunteers do not use the terms "family" and "next generation" lightly. Everyone who contributed to this story volunteered these terms to illustrate the strength of this close-knit community.

"We're a family," says Doris Becker, 91, who has been involved with the Playhouse since her first child role in 1935.

Lechner echoes the sentiment. "The Playhouse welcomes everyone and it's a place where members support each other both on and off the stage." 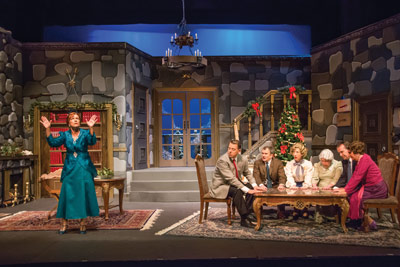 From our interaction, it's clear members respect and learn from each other, and celebrate each other's contributions. They also take great pride in all the couples who found each other while volunteering or working at the Playhouse.

When we spoke, Charles Corritore and Becker rattled off a long list. While Managing Director Richard Davis was telling me about how he met his husband at the Playhouse, Lechner jumped right in and described – with dialogue – how she watched their romance develop. Everyone spoke with excitement about another Playhouse wedding coming up soon. Davis summed it up best when he said "the Playhouse is not just our job, it's our lives."

To deepen a sense of family, many biological clans have worked or performed together. Lechner shared that one of her happiest moments was when she was on the stage with her entire family. But there are "adoptions" as well. "Charlie (Corritore) is my third son," said Becker as we sat in the box office with him. Corritore just blushed a little and offered, "I am very proud to be called her son."

Corritore's long association with the theatre (in his 43rd season) is similar to many others' tenure with the organization. The next generation is now working up the ranks. "We have people on staff who were youth performers when I was Youththeatre director" says Clerkin. "It's very exciting. They are the future of the Playhouse."

What does that future hold? Clerkin says they will always need people to come see a play, but "we have to balance that with what we do for the community." She goes on to mention more community outreach and collaboration, something blossoming during her tenure that will certainly expand with the next generation.

Both Clerkin and Lechner will continue to be involved with the organization after they retire. But both are pleased to be here for the centennial. "It's a privilege and a great responsibility to be part of the hardworking Playhouse staff and dedicated board as we honor those who have had the foresight to get us to our 100th season," says Clerkin.

Those predecessors deserve to be honored, as they were as hardworking and generous as the current staff. In 1919, while World War I was winding down, the core members of the theatre re-banded and created The Community Playhouse in what is now the Downtown YMCA. They opened the doors to all with no admission charge. They did put out a barrel in the lobby marked "the future tale of the Playhouse." One can imagine a penny or nickel dropping with a soft thud into it. Or maybe a silent dollar or two from the more wealthy patrons.

The Erie Playhouse grew under the tender care of these ancestors. Clerkin says as they prepare the theatre for generations to come, "our place in Erie is secure with the talent and support we receive from our Playhouse family and the community."

It all happens one penny or nickel or $100 at a time. Harry Vincent would be proud.