Erie Scores 8 in Victory Over Sarnia 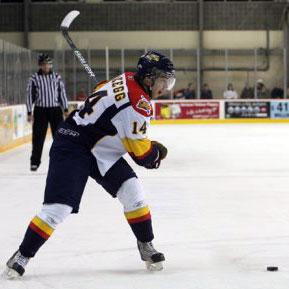 The Erie Otters are inching their way towards home ice advantage in the first round out of the Ontario Hockey League playoffs.

On Sunday afternoon, the Sarnia Sting found out how powerful the Otters are at the Tullio Arena.

Mike Cazzola recorded a hat trick, while 10 different skaters had at least one point in Erie's 8-2 victory in front of 4, 651.

"These are big games, and we can't let them go to waste," said Cazzola, who was one of three Otters with three points or more. "We came out and we played our game, which was real nice."

Greg McKegg led the scoring parade with two goals and two assists, while Shawn Szydlowski added a goal and two assists to lead the surging Otters to their fourth straight win.

"It was a hard game to get excited for," coach Robbie Ftorek said, referring to the fact that Sarnia had already been eliminated from playoff contention. "But the guys know the business at hand and they took care of it."

Erie took the life out of a Sarnia team that allowed 20 goals in its previous two games by building a 4-0 lead at the end of the first period.

Szydlowski scored just 38 seconds into the game with a wrist shot that buzzed over the shoulder of Troy Passingham for his 38th goal of the season. Sandwiched between two Cazzola goals was McKegg's 45th of the season, which is tops on the squad.

That was more than enough for rookie goaltender Chris Festarini to earn his fourth consecutive win between the pipes. Festarini stopped 29-of-31 shots in his fifth straight start replacing Ramis Sadikov, who is still nursing a nagging leg injury. Nick Latta and Kale Kerbashian were the goal scorers for the Sting.

"It was great to see him win four straight," Cazzola said. "He's worked hard on an off the ice. He didn't have the best of luck at the start of the season, but when Rammer went down, he pulled us through the hard times."

The Otters would score two more times in the second period, as Brett Thompson put his 42nd of the year behind Passingham and McKegg wired a shot to the top corner for his second of the game. Passingham stopped 29-of-37 Erie shots.

Cazzola completed his first hat trick of the year 10:40 into the third period, while rookie Connor Crisp rounded out the Otters scoring with his fourth goal of the season. With the win, the Otters (36-26-1-1) moved 10 games above .500 for the first time since the 2001-02 season.

"It shows that they're focused," Ftorek said. "They want to win and they know what they have to do."
Erie remains in sixth place in the Western Conference and is one point behind fifth-place Plymouth, who fell to Sault Ste. Marie 4-1 Sunday night. Erie is just two points behind fourth-place Windsor, who beat Guelph 4-3 in a shootout Sunday.

The top four teams in the Western Conference earn home ice advantage in the first round of the playoffs.
Both the Whalers and Spitfires have a game in hand on the Otters, who have played 64-of-68 regular season games.

Erie has also built a five-point lead over Guelph and the London Knights, who are battling each other to stay out of the dreaded eighth spot, which would likely play Owen Sound in the first round.

But for now, Erie has just one thing on its mind, which is winning. The team can only control its own destiny. As much as they want to scoreboard watch this time of season, remaining focused on the next opponent.
Erie's next challenge is Plymouth, and a win would move them to fifth in the conference, one step closer to home ice advantage. That game is Friday night at the Tullio Arena, scheduled for a 7 p.m. start.

"Plymouth might be another potential team we might play in the playoffs," Cazzola said. "We just have to set the tone early, and come out hitting. We just need to send a message, just in case we meet them in the playoffs."