Recovery in progress, but lagging behind national average 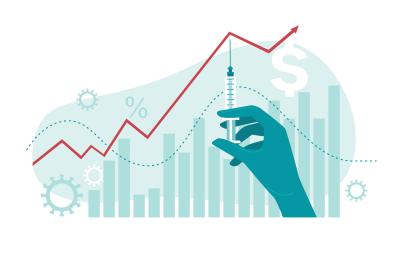 The onset of COVID-19 was a gut punch to both the national and local economies, with huge losses in jobs and productivity. Now, nearly a year later, we've slowly begun to collect our breath and rise to our feet. Erie, however, still finds itself a little woozier than the average U.S. city.

Dr. Kenneth Louie, Economic Research Institute of Erie (ERIE) director and Penn State Behrend associate professor of economics, broke down the latest numbers and what they mean in a recent Zoom interview with the Jefferson Educational Society's Ben Speggen. Louie and his team are preparing for the release of the latest Erie Leading Index (ELI), ERIE's signature publication shared with over a thousand business leaders and stakeholders city-wide. The ELI serves as a snapshot of the current state of the Erie economy while anticipating what's to come. Eight variables are weighted and aggregated into one composite number, the titular ELI, that functions as a barometer of Erie's trajectory six, eight, and 12 months down the road.

Erie before the pandemic

In the months leading up to the pandemic, Louie characterized Erie's economy as "fairly stable." It was not progressing at the same pace as the national economy in terms of output (real gross domestic product, or GDP) and job creation, but it was "holding its own." Local output in 2019 had measured around $11 billion, employment stood at about 128,000 jobs, and wages were steady.

Erie in the pandemic's initial months

As mentioned previously, March and April of 2020 packed a wallop, as shutdowns and restrictions had businesses scrambling. Erie lost a total of 22,000 jobs (about 18 percent of employment pre-pandemic), and employment skyrocketed from 5 percent to over 17 percent. If the Great Recession of 2007-09 bled Erie (over 8,000 jobs lost then), COVID-19 hemorrhaged it.

Worse off were sectors such as leisure and hospitality (9,600 jobs lost — 69 percent), retail trade (3,600 jobs lost — 25 percent), professional and business services, overall manufacturing, and mining/logging/construction. In contrast, sectors such as hospitals and healthcare, plastics and rubber manufacturing, and federal government employment were virtually unscathed.

Meanwhile, Erie consumers spent 40 percent less between January and April of 2020 compared to 2019.

Erie compared to other cities

Getting down to how Erie fared compared to other cities, Louie first examined our "neighbor" cities of Pittsburgh, Buffalo, and Cleveland. Of those, Erie had not been hit as hard as Buffalo or Pittsburgh (job losses between 18 and 19 percent), but slightly harder than Cleveland (17.2 percent of jobs lost).

Next, he examined Erie in comparison to other cities across Pennsylvania — Williamsport was hit the worst (22 percent job loss), while Bloomsburg/Burwick suffered the least (around 9 percent of jobs); Erie's job losses were somewhere in between cities like Scranton/Wilkes-Barre and Lancaster.

Finally, Louie looked at Erie versus "peer cities" that had similar sized output and industrial structure (percentage output per sector). Erie's job losses were above the average of 13.8 percent — not as severe as cities like Kalamazoo/Portage and Saginaw in Michigan (over 20 percent), but worse off than Southern cities like Ft. Smith, Ark.; Florence, S.C.; Gainesville, Ga.; Lynchburg, Va.; and Tuscaloosa, Ala. (all under 10 percent).

From May 2020 onward, both the nation and Erie began to exhibit signs of recovery. However, Erie's economic convalescence has not been quite as swift. As of December, Erie had recouped 10,000 of the 26,000 jobs it lost (44 percent) — nationally, the U.S. had recovered 12 million of 22 million jobs lost (56 percent) as of January 2021. Louie noted that reporting of local numbers often lags behind national figures by a month or so.

Federal and state programs to soften the economic blows of COVID-19 such as the CARES (Coronavirus Aid, Recovery, and Economic Security) Act, the Paycheck Protection Program (PPP), and COVID-19 Working Capital Access (CWCA) program, and the stimulus packages were effective short-term, as clear upticks in consumer spending closely followed. By August of 2020, Erieites were spending near what they did prior to the pandemic.

After the second shutdown post-Thanksgiving, however, consumer spending in Erie plunged. It's been up by about 7 percent in February, although Louie could not discern whether that was due to the second stimulus package, expectations of the pandemic ending as vaccination rates increase, or some combination thereof.

Forecasting the rest of 2021

Will Erie ever catch up to where it was before COVID? Should we be concerned that it is taking longer than cities that were initially worse off, like Pittsburgh and Buffalo (job recovery rates around 60 percent compared to our 44 percent)? How have our counterparts across the state in Reading been able to reclaim an astounding 98 percent of their job losses? Is the Biden administration's "American Rescue Plan" a viable solution to heal our wounds?

All of that remains to be seen. Erie may be slower on the rebound in part due to the degree which its economy is diversified. Louie notes that cities with more jobs in high-tech, STEM-related fields have proven more resilient throughout the pandemic. Of promise in Erie are developments such as Behrend's Innovation Commons, the recent opening of Gannon University's iHack Center, and a host of other entrepreneurship and innovation initiatives that will infuse Erie with both more employers and employees in these advanced sectors.

Louie is of two minds about Biden's "American Rescue Plan" — he likes the idea of stimulating the consumer economy, but is leery of the risk of adding to the deficit and inflation, thereby "overheating" it.

Whatever happens as the denouement of this pandemic plays out, Louie hopes it has helped us appreciate the degree to which we are interdependent — not only economically, but socially as well. "We're all in this together" quickly became one of the most cliched phrases of COVID-19, but it is instructive going forward.

"If we do not succeed in conquering this crisis together, what do we have?"