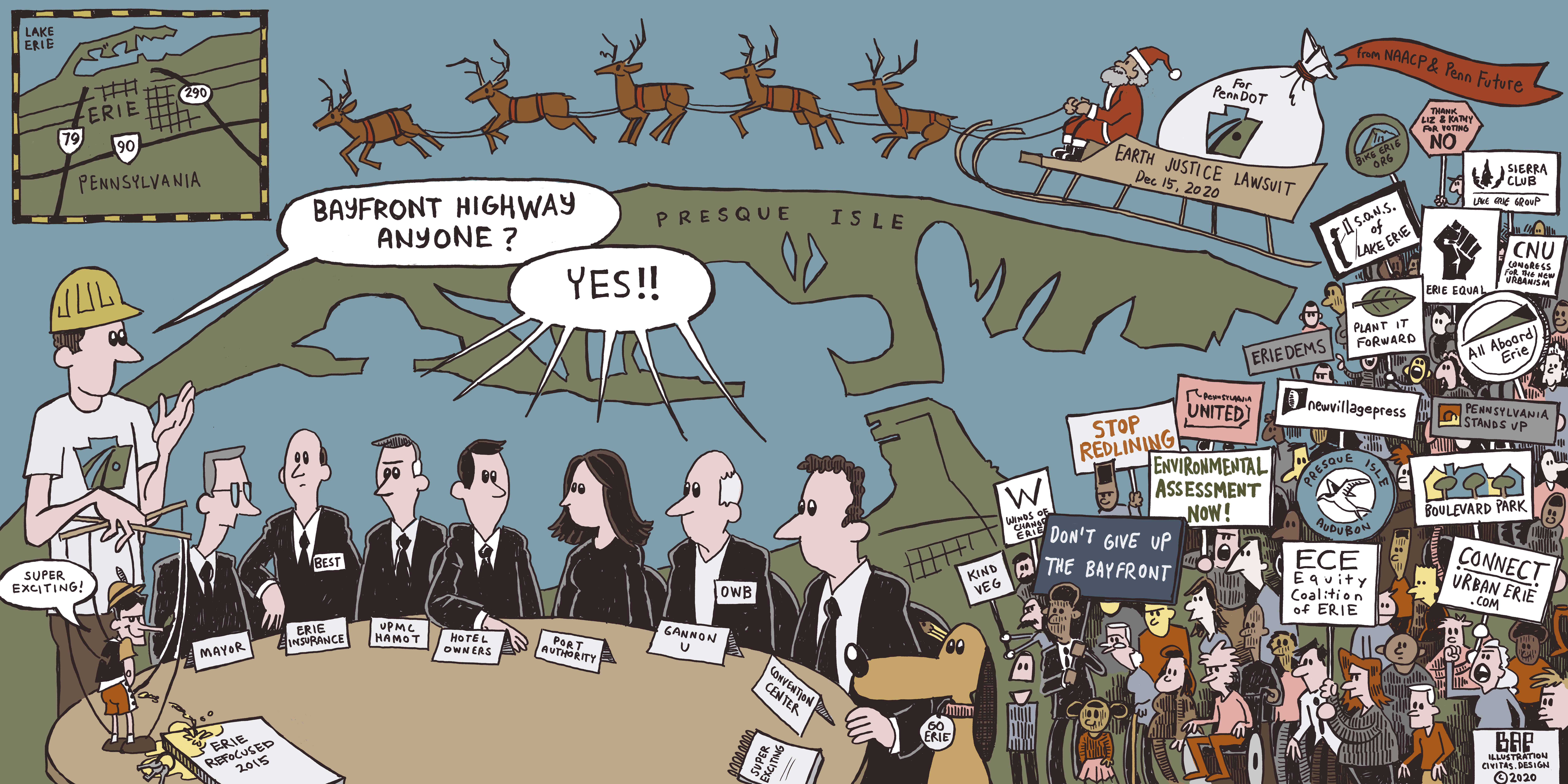 Click here to view a high-resolution version of the CIVITAS.design cartoon illustrated by Brad Pattullo.

A note from the editors: Erie has long been a divided city. Over the years, the construction of new high-traffic roads has served to limit accessibility and demarcate neighborhoods. Pedestrian and bike pathways have unfortunately taken a back seat to car culture. This runs in opposition to the countless studies, suggestions, and words of advice from modern urban planners. As Erie looks to properly develop one of its key resources — its bayfront property — an eye must be kept on the future. Plans must be transparent, with public safety and a more efficient traffic flow being key priorities. A well-developed bayfront must be for the benefit of all Erie residents, not just some.

In 1854, railroads pushed through Erie near 16th St. and for about 16 blocks along the waterfront. Using wooden staircases from bluff-top homes, workers walked down and over tracks to jobs on Presque Isle Bay – where trains dropped off coal and picked up iron ore and lumber from lakeshore steamers.

As tracks divided the city, some neighborhoods were connected by underpasses, overpasses or dangerous at-grade crossings. After fatal accidents on the tracks at East Ave., the public called for a bridge in 1918. Dedicated in 1938, the McBride Viaduct was rebuilt in 1977 then neglected until it's 2019 demolition.

By 2005, the Bayfront Connector was completed and featured a $31 million, 1,100-foot-long bridge over Wintergreen Gorge. The Connector is the final segment of the Erie "Beltway" – a highway loop around, and through, the city. While supporting suburban and visitor traffic, the Connector further divides the "redlined" neighborhoods of Eastside Erie.

Over 11 YEARS AGO / Funds to repair Viaduct rejected

11 YEARS AGO / Viaduct closed to vehicles

In 2017, Republican candidate John Persinger spoke in favor of saving the Viaduct. Democratic candidate Joseph Schember opposed preservation but agreed to permit a Public Hearing to weigh the cost/benefits of retaining a non-vehicular bridge.

In January 2018, Mayor Schember opposed a Public Hearing and pledged to demolish the bridge. CIVITAS and ErieCPR organized Viaduct Town Hall at Jefferson Educational Society. In March 2018 the New York Times published a front-page story about the Viaduct controversy. ErieCPR raised over $20,000 and hired a civil rights attorney to file a federal lawsuit and appeal in 2018 and 2019 — both dismissed by Judge Susan Paradise-Baxter.

In February 2019, then City Councilmember Bob Merski orchestrated block to fellow Councilmembers (Liz Allen, Sonya Arrington, and Kathleen Schaaf) as they attempted to honor the public's call for an on-the-record Viaduct Public Hearing.

The 2019 demolition cost $1.5 million. Flawed study by L.R. Kimball and an engineering plan by Transystems also cost another $1.5 million. Thus, total demolition cost equaled the cost of completely rehabbing the bridge for continued non-vehicular use. Without Viaduct, residents must walk along the Bayfront Connector.

PennDOT shared a vision of an expanded Bayfront roadway that would increase traffic on the waterfront and on Rt. 290 Bayfront Connector. Challenges were published in the Erie Times-News: "PennDOT Is Trying to Solve the Wrong Problem" Michael Fuhrman, Jan. 2019 and "What Kind of City Do WE want?" Lisa Austin, Aug. 2019

12.15. 2020 On behalf of NAACP and PennFuture, Earth Justice sues PennDOT and FHWA for skipping Environmental Assessment.

Established in 2004, CIVITAS and Connect Urban Erie and educated residents and decision-makers about urban design, adaptive reuse, walkability and connectivity, and the collective impact of these issues on economic development, public health, and social justice.