A Reader retrospective on a decade of issues, and the people who made them happen 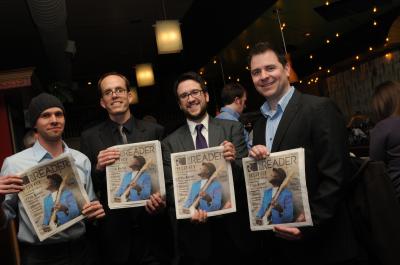 Ten years ago, on what would have been an otherwise quiet Monday in March in Downtown Erie, Pennsylvania, a crowd began to gather in its heart. As the people poured into 1201 Kitchen, drinks began flowing out from behind the bar and food out of the basement kitchen below. There was music buzzing. But so were conversations.

The chief indicator of what was the topic du jour: Copies of a new newspaper strewn throughout the restaurant and clutched in the hands of those talking.

On March 28, 2011, the Erie Reader held its official launch party, announcing to the community that a vacant seat at the media table in Erie would be now filled by an alternative, independent publication. Two days later, the core of the Reader team would be in their cars in the early hours of that Wednesday, March 30 morning, driving the new newspaper throughout the county to various locations, from gas stations to grocery stores, from bars to banks, libraries to restaurants, where people would pick it up free of charge.

At the beginning, the lead-up to the launch had been months in the making. Erie native Adam Welsh, one of the Reader's co-founders and editors-in-chief, had returned to Erie from San Diego to both be closer to his family and raise his own. Upon beginning again in Erie, Adam, an avid reader of the San Diego Reader, headed to newspaper stands to find its Lake Erie counterpart. He came up empty-handed but full of inspiration. He would create it — the Erie Reader.

Not long after, childhood friend and fellow Erie expat, who had, as Horace Greeley over a century earlier advised, also gone west as a young man, Brian Graham plotted the course back to Erie to begin toiling on the business plan: Create a free publication that would serve as an independent voice in the community to cover news and politics and arts and culture.

After all, cities and towns and metros throughout the country have had alt-weeklies for years — why couldn't and why shouldn't Erie have one, too?

Thus came the plan: Study the industry by scoping out every member of the AAN (Association of Alternative Newsweeklies, which we admired then and are a proud member of now), and build out the team. Adam and Brian recruited another childhood friend, Jaimen Gallo, who designed the first iteration of ErieReader.com and the early covers of the print publication, as well as ads, and more.

Next up, they met with local university faculty members to scout local prospects. They got my name and number and gave me a call and set up a meeting, and in January 2011, I joined the crew as the Reader's first managing editor, serving in that post for 122 issues before transitioning to a contributing editor role. Katie Chriest served at the helm for the next year before passing the mantle on to Nick Warren, who celebrates his 100th issue at the managing editor post with this very issue.

In between then and now, there have been numerous contributors deserving of praise for their contributions — from in-depth cover features on issues running the gamut of fracking in Northwestern Pennsylvania, celebrity interviews, and much, much more; to reviews of restaurants, movies, albums; to coverage of upcoming events and theater reviews; to local, regional, and national political commentary and analysis; and so much more.

In many ways, the anatomy of the Reader has remained the same over the past 10 years — a backbone of events-based coverage, fleshed out with stories and features concentrated at the hyperlocal level.

In other ways, the Reader's grown and evolved throughout the years — adding its first editorial cartoonist, Bryan Toy, in June 2012 and now boasting five today. There were more columnists in the early days, yet more reviewers now. Today, Jessica Hunter serves in the newly created publishing & new media role, with Matt Swanseger functioning as the publication's vital copy editor, and Jim Wertz holding the other contributing editor post opposite myself.

Along the way, the Reader's launched perennial marquee issues: Year-End Reviews (2011), 40 Under 40 (2013), and Best of Erie (2014), launching more intuitive voting platforms and hosting Best of Erie Experience parties (which succeeded early attempts at hosting NYE parties), as well as 40 Under 40 Experience parties in collaboration with Young Erie Professionals. The Reader features more thematic issues these days — from the annual Food Issue to the Innovation, Industry, and Entrepreneurs (I2E) Issue, to annual looks at the Jefferson Educational Society's Global Summit Speaker Series, to February's focus on Black History.

In addition to finding the Reader on stands, these days you can also find it in your inbox with a weekly newsletter highlighting contents of the current issue as well as online-only features and articles. The website predates the print product (who remembers the countdown clock!?), and several generations in, it's more responsive, easier to use, and features dedicated space now for some of those marquee pillars, thanks to our Great Lakes Online Media partners at Epic Web Studios.

Other milestones and memories? Like the talented contributors, there are many. The Reader has hosted political debates and taken two swings at TV shows. We've sold T-shirts and beach towels. Our writers' work has been featured in national outlets and we got a mention in the bestselling Our Towns by James and Deborah Fallows. There have been myriad interviews from other local media outlets, including one in which a certain piece of art had to be blurred out on air. Yes, we have an eclectic task of art on the walls of the Reader offices — which began in a shoebox-sized space in the Masonic Temple before graduating up into bigger space there before launching over to the Renaissance Center, first on the ninth floor, later on the 13th.

But before that, it was working from homes, out of apartments, and houses with a Post Office box at the Pony Express on Eighth Street. Today, production is once again happening remotely amidst the Covid-19 pandemic, which has taken a toll on the media industry as a whole, the Reader included.

What does the future hold? We don't know. But we'll be there to report on it, to help make sense of it, to be a conversation starter, to be the trusted resource you've come to know over the past 10 years.

Twice we've printed the Horace Greeley quote: "Journalism will kill you, but it will keep you alive while you're at it," first in our 100th issue and again in our 200th.

While there have been late nights and early mornings, heated discussions, and impassioned arguments, the trade we labor at and love hasn't killed us yet. And the Reader's still very much alive with the passion and commitment to the cause it had from the start.

So, as the second decade of the Reader begins, thank you, Reader readers. Thank you for all of your support, your criticism, and your encouragement; onward and upward and into the future we push.