Erie's Roots in The French and Indian War

What fell and rose in a forest? 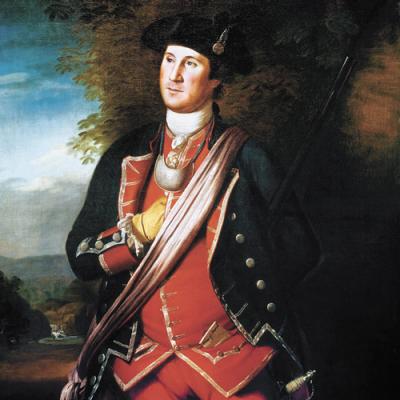 The French and Indian War in North America (1754-60) began as a consequence of a blunder by a 21 year-old British officer who led his men to defeat a French colonial force in western Pennsylvania. The young British major had a year before been sent to spy on the French forts in that region, including Fort Le Boeuf near what is now Erie, Pa., where he dined with a French commander and relayed a message from the British colonial commander asking the French to withdraw from Pennsylvania. The French leader was polite but refused, and the next year, the young major was sent back to western Pennsylvania to join the British mission to expel the French.

In a forest near Fort Duquesne (now Pittsburgh), the British unit, led by the now 22 year-old major, came upon a French unit that was on a diplomatic mission, and mistakenly perceived them as a hostile force. The short battle that followed was brutal, and the French commander was savagely killed. The consequence of this event was to begin the so-called French and Indian War that spread quickly from Pennsylvania to the northeast, where the British faced French forces established in Canada. Eventually, triumphing over the French in North America, the British became the largest colonial empire in the world. The North American conflict by 1756 spread to Europe, Africa, the Caribbean and Asia, and is usually called the Seven Years War. Arguably it was the first true "world" war.

And who was the inexperienced British major from Virginia who, following that disappointing dinner in the French fort near Erie, Pa. (which led to his military encounter a year later several miles south in a forest near Pittsburgh), set into motion a cataclysmic global war?

It was none other than George Washington, an ambitious, naïve young colonial aristocrat from Mount Vernon, Va., whose early military career was mostly a series of disasters.

Washington, in spite of his ineptness, was both very brave and very lucky, and before the French and Indian War was over, having survived some dangerous battles, he retired to Mount Vernon to become a farmer, politician, and land speculator.

Although the war pitted the two most avaricious colonial powers in the world at that time, and one of them finally emerged dominant, the outcome of the war was determined by a third party, the Native American tribes who had originally populated this region of North America. Most of these tribes were allied with the French, and this enabled France, with only 85,000 settlers and an army supplied primarily by these settlers, to control Canada as well as much land that is now in the U.S. The British, on the other hand, had one-and-half-million English settlers on the eastern seaboard, and a professional army made up primarily of soldiers from the mother country.

Until the French and Indian War, however, British authorities held most Native Americans in contempt, and had far fewer tribal allies. The largest confederation of Native American tribes, the Iroquois nation, had remained neutral until this time. Missteps by French commanders during the war led many tribes to switch sides, and in the case of the Iroquois, to choose sides with British. Most historians agree that Native American involvement in the war was decisive in the British victory.

In Europe, as the war widened to the continent and beyond, the French and English monarchs increasingly turned their attention away from their North American colonies, and to their rivalry nearer to their home turf, and to the south and east. The growing troublesome relationship between the English monarchy – as well as its parliament – had been exacerbated by attitudes that regarded English colonial settlers as not full English citizens. American colonial settlers initially refused to contribute to the financing of the French and Indian War, but when the new British Prime Minister William Pitt came to power, he showed new respect to the North American colonies, and the colonies became enthusiastic about the war. This further assisted the final British victory.

The French and Indian War in North America (1754-60) began as a consequence of a blunder by a 21 year-old British officer who led his men to defeat a French colonial force in western Pennsylvania.

A series of taxes in the 1760s imposed arbitrarily on North America, however, undid the new colonial enthusiasm, and led to the eventual alienation of the British settlers that culminated in the 1770s with the American Revolution.

Leading that revolution, of course, was its first and only military commander, the former brash and naïve major who had inadvertently set into motion the world's first global war in a Pennsylvania forest more than twenty years before. George Washington, the unanimous choice of the Continental Congress to be the revolutionary army commander in chief, was now older and wiser. Like so many of his countrymen, his original ambition to be an acceptable Englishman had been replaced with a desire to found not only a new and independent nation, but establish a new form of government that would change the world for centuries.

All that from a failed spy mission and unfulfilling dinner at a frontier fort named Le Bouef near Erie, Pa. George Washington was no James Bond, but he became the indispensable founding father.