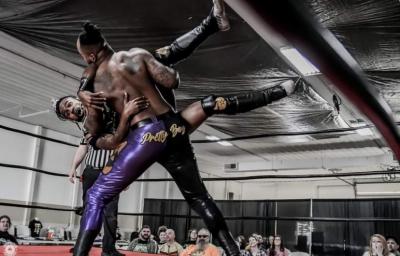 If you haven't heard of Paul Bilbo, perhaps you've heard of "The Urban Playboy" aka Pretty Boy Smooth, Bilbo's ring name. The 30-year-old independent professional wrestler, actor, and philanthropist is making quite a name for himself as he travels around the country winning wrestling matches and the hearts of his fans.

Standing at 6-foot-9 and weighing in at 270 pounds, Pretty Boy Smooth is a force to be reckoned with. Trained by WWE's John Gargano at the Absolute Intense Wrestling Academy in Cleveland, Pepper "The Blade" Parks of All Elite Wrestling at Grappler's Anonymous in Buffalo, and Aaron Draven with Pro Wrestling Rampage, Smooth wrestles in an Athletic Powerhouse style, mainly known for powerful strikes, a handful of submissions, and the ability to toss his opponents around the ring with ease. His finisher, "The Player's Club," is a Fireman's Carry Spinebuster variation that no opponent has been able to kick out from. Smooth is no stranger to high pressure situations, winning the Ryse Grand Championship at the Ryse Anniversary show, besting a total of six opponents in one night. He earned his nickname of "The Urban Playboy," due to his flashy style and the women who adore him, using both to his advantage in his tongue-in-cheek marketing and on social media.

"After six years of trial and error, I was able to cultivate "The Urban Playboy," which is essentially my personality from my college days, but dialed up to level 10. The Urban Playboy is a ladies man with metrosexual attributes, but isn't scared to throw down. I draw inspiration from Will Smith's character in the Bad Boys series, Youngblood Priest in the more recent version of Superfly, and the movie Pootie Tang, along with other forms of entertainment I've enjoyed and can relate to. I also have another layer to my wrestling character called The ETHER, which is the more unhinged version of me, kind of similar to a Dr. Jekyll and Mr. Hyde vibe," Bilbo said.

Bilbo has been a professional wrestler for about six years and says it has been one of the most challenging but rewarding things he's ever done in his life. "To people that only have a surface level understanding of it, they assume we just dress up in fancy outfits and pretend to fight each other. However, what we do is far more complex than that," Bilbo explained. "We tell stories. We take fans on an emotional rollercoaster. Professional wrestling is supposed to be watched like a live action film, rather than boxing or UFC. We create larger-than-life characters with the purpose of making the crowd feel and suspend disbelief, the same way they do when they go into a movie theater."

Detailing the behind the scenes skills necessary in the line of work, Bilbo noted that "for those of us that take the profession seriously, a lot of work goes into our physical appearance, learning the fundamentals, beating our bodies up so they get used to the contact — which a lot of times hurts more than you could imagine — and learning how to get comfortable in front of the camera." Comparing it to a musical or play, Bilbo keyed into the nuance needed to play to the crowd. "We are tasked with taking you on that emotional rollercoaster and if something isn't working, we need to figure it out in real time and change direction, which in my opinion makes what we do way more 'real' than we get credit for," said Bilbo.

That ability to make the crowd feel and suspend disbelief is working well for Bilbo as he harnesses the skills he's learned in wrestling into film acting, a natural transition with his first opportunity performing action scenes in the indie film Pact of Vengeance, directed by Len Kabasinski and starring All Elite Wrestling Superstars Diamante and Peter Avalon. "It was really fun to work with them on the fight scenes and I quickly realized that a lot of the 'entertainment' skills I learned with pro wrestling are transferable to acting. Although you won't always be in front of a live crowd, actors still have to connect with their audience through the screen they are watching from. Actors are able to take themselves out of their normal selves and elevate to perform, just like we do in professional wrestling, and although it may be less taxing on the body, the same amount of hard work and effort is needed to truly be good at it. I was literally in love with being on set," said Bilbo.

Bilbo was also involved in the comedy-horror anthology called Shingles, based on a book series by the collective known as Authors & Dragons, directed by Steve Rudzinski. "Steve and I met by a chance encounter on Twitter, and after bonding over our ideals about the journey of the independent artists, he allowed me the opportunity to video audition for Smasher, a tall and jacked linebacker who is part of the Omicron Phi Fraternity," said Bilbo. "Without giving away too much of our anthology tale, 'Aliens Wrecked My Kegger,' I was tasked with going from playing a football player that couldn't construct a basic sentence in the English language, to him becoming a smooth and intellectual person by the back half of the film. It was really awesome to have lines to memorize and bring to life, so I wasted no time getting to work."

Smooth and intellectual isn't too much of a stretch for Bilbo. Born in Hempstead, N.Y., he played basketball at St. Dominic High School in Oyster Bay, N.Y., where he helped lead his Bayhawks team to a 52—24 record in his last three seasons. Bilbo later played Division I basketball at Hofstra University. He finished his collegiate career at Division II college Mercyhurst University, receiving a bachelor's degree in communications (2013) and a master's degree in organizational leadership (2015). In recent years, he created the PB Provides Scholarship Fund at the university and is making a real difference in the lives of the recipients.

As a philanthropist, Bilbo created the college fund to provide financial assistance for Black students already attending or recruited to Mercyhurst University, with the intent of pursuing a degree in communication. "Being able to effectively communicate with others is such a very underappreciated skill in today's society and I would like to help change that. Also, I feel it is my duty as part of my marginalized community to do what I can to help more Black youth get into positions where they can succeed, as well as help diversify my alma mater," said Bilbo. To date, the scholarship has been awarded to two students and contributions to the scholarship are continually being accepted on his website.

Bilbo credits his years as a grad student for getting the ball rolling on his wrestling career. "I've always loved it because my dad and grandmother got me watching at a young age," he said. But while finishing grad school and after attending an independent wrestling show, Bilbo says he started attending shows himself and things progressed from there. He is currently ranked by Pro Wrestling Illustrated at #262 out of the top 500 wrestlers among both television and independent leagues. He previously won the Revenge Heavyweight title in Erie against current AEW superstar Wardlow, and holds the Ryse Wrestling Grand Championship for Ryse Wrestling in Pittsburgh. He will have the gold in his possession at the upcoming ComiCon Erie.

"I have faith that if I continue on the road I am on, I will end up on bigger platforms for both professional wrestling and acting. I am learning to embrace the journey and enjoy every step," said Bilbo.