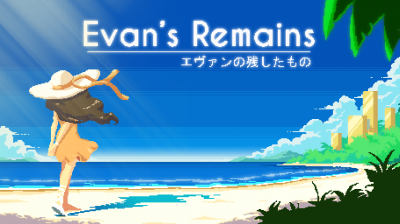 Recent college grad desperate for cash auditions for the role of … detective? Summer jobs rarely deliver such high stakes (and platforms) as they do in Evan's Remains, a mystery-thriller puzzle adventure game developed by Matias Schmied and published by Erie's Whitethorn Digital. Players take control of sun-hatted twenty-something Dysis as she explores a remote tropical island in search of her employer's missing golden child, the titular Evan. Shortly after her arrival, she happens upon a series of cryptic monoliths, each a word spelling out the location of an ancient artifact. What do they mean, who planted them, and where are those people/aliens/supernatural beings now? Given their love of building (literally) lofty language, did they collectively die of heatstroke in the midst of a civilization-wide spelling bee?

That's up to you to find out as you traverse the forsaken paradise's breathtaking landscapes, each stage uniquely rendered in gorgeous pixel art — if you're familiar with other indie adventures such as Fez and Hyper Light Drifter, you'll have a good idea of what to expect. Unlike those games, however, Evan's Remains is as much (if not more) about plot as it is gameplay. In fact, it might be better described as a playable graphic novella than a game — regardless, it's successful as an overall experience. Each area is visually memorable and interesting, and you're given extra time to appreciate it as the dialogue unfolds. (Note: If you're seeking bombastic, continuous action with no n00bs allowed, Evan's Remains may not be your cup of Mountain Dew.)

The music, which combines classic chiptune tones with live instrumentation, is entrancing and beautiful. It certainly soothed me through any frustrations I might have had with the game's platforming puzzles — although such moments were few and far between. Each monolith involves arranging a series of disappearing, teleporting, and/or transforming ledges in such a way that Dysis can leap over a tall column and continue sleuthing. With only two controls — walking and jumping — the learning curve is minimal. The monoliths have an internal logic to them, but you can also solve them through pure trial and error. Or skip them altogether — this game is clearly not intended to stress you out.

If you have a few hours to spare and either a computer or any one or more of the current generation of video game consoles, Evan's Remains is a pleasant distraction with heart. This is one summer job that is not a drag.

Evan's Remains is available for download on Steam, Xbox One, Playstation 4, and Nintendo Switch for $6.99 // ESRB rating E 13+ for serious themes and mild language.