Every Day's the Same: Palm Springs Is Charming but Is Over Too Soon

Andy Samberg and Christin Milioti live on a loop in ways that are both funny and painfully relatable. 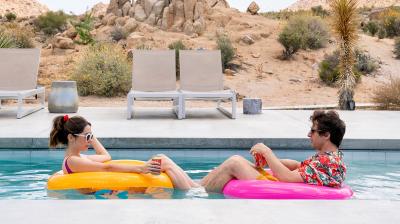 It's interesting to see that Groundhog Day has become a genre in itself with films as varied as 50 First Dates, Edge of Tomorrow, and Happy Death Day running with that simple but ingenious premise. But while those films use the device as a mere plot point, only Palm Springs deals with that first film's depiction of the pure existential horror that an eternity can bring about. The result is a sci-fi/romantic comedy/drama/character study that is too short to do all of those ideas justice, but the charisma of its lead actors still makes it a wonderfully entertaining experience.

Sarah (Cristin Milioti) is a reluctant maid of honor at her sister's wedding who meets Nyles (Andy Samberg), a carefree man who seems to have a supernatural ability to predict things before they happen. After their encounter, Sarah learns that Nyles has fallen into a time loop and is repeating the same day forever: a time loop that she has now fallen into as well.

The concept of repeating a wedding for an eternity is already a terrifying concept for a lonely person, but Palm Springs has the added benefit of coming out when the entire world seems to be forced to live the same day over and over again. Samberg and Milioti react to their situation in ways that are both funny and painfully relatable. When the film dives into the nuts and bolts of why they're stuck in the loop things become a little muddled, but the chemistry between the two leads is more than enough to make the rest of the film a charming and sweet romantic comedy. Exactly what we need in our own time loop. Palm Springs is currently available exclusively on Hulu. — Forest Taylor