A Postcard from the Peach. 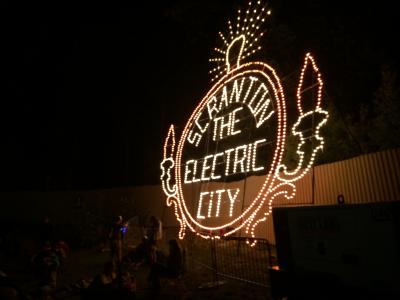 In the land of funk and groove, there are few altered realities more apt to 21st century life than the role of communication as a form of currency.

Inside the Montage Mountain Lodge, communication hungry hippies batten down around floor level electrical outlets, communing under the pretense of charging their phones. They're so committed, in fact, they've unplugged the ATMs in favor of their phones. The symbolism is telling.

"In the olden days" of the late '90s, you'd go to a festival and leave behind the people who couldn't or didn't go. You'd make friends, break bread, and overindulge your way through four days of peace, love, and (fill in the blank).

Can you imaging if the crew who crashed the gates at Woodstock ('69 not '99) had cell phones? Woodstock would have been one of the most orderly affairs in concert going history. No one would have abandoned their ability to communicate for an opportunity to commune. At least few do today.

But we absorb and distribute technology differently than we used to.

We're not just checking in. We're recording every event in HD, capturing every passing moment, sometimes for posterity, sometimes for memory's sake. Whatever the motivation, there were as many people recording "Maggot Brain" during Thursday's Parliament Funkadelic performance as there were people watching it "hands free." The proportion was equal across Friday's spotlight performances, Blackberry Smoke, Tedeschi Trucks Band, and the Trey Anastasio Band.

So head over to Twitter using the hashtag #postcardsfromthepeach. Today begins two days of Allman Brothers Band driven performances, complete with full performances of the band's classic album "Eat A Peach" in its entirety.

It sure to be something worth texting about.