Halloween Ends is both fascinating and frustrating 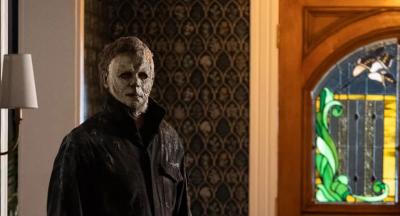 David Gordon Green's Halloween Trilogy has proven to be a strange beast. After a by-the-numbers reboot and a shockingly inept sequel, his finale proves to be surprisingly interesting. Its plot about collective trauma and how monsters are made manages to be the most creative thing the series has done since the underrated Halloween III. Sadly all the intriguing premises keep getting interrupted by the stupid Halloween movie to which it's attached. It becomes so disheartening to see such an interesting premise succumb to the ravages of banality.

Four years after Michael's second rampage in Haddonfield, the townspeople are still suffering from the trauma of his memory. This trauma is transferred to a young man (Rohan Campbell, looking like a dead ringer for Michael Rooker in Henry: Portrait of a Serial Killer) accused of killing a boy he was babysitting. As the town's torment drives the man further into madness, Laurie Strode (Jamie Lee Curtis) believes that the spirit of evil has found a new home.

With its pessimistic depiction of small-town life (literally every Haddonfield resident we meet is an awful person), this feels less like a Halloween film and more like a lost Stephen King adaptation. The change in tone is welcome, but sadly gets dropped so we can see Laurie fight Michael for the seventh time. Halloween Ends is half a great film — the wrong half, and the filmmakers don't have the courage to truly move beyond the tired cliches of the slasher, making this the most frustrating entry in the series. Like the aforementioned Halloween III, this film would have benefited without a single frame of Michael Myers.