by Nick Warren
View ProfileTwitterInstagramRSS Feed
May 23, 2018 at 2:30 PM 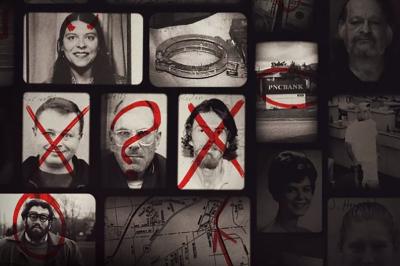 Netflix
Produced by the Mark and Jay Duplass, Evil Genius tells the story of Marjorie Diehl-Armstrong, William Rothstein, and the many people drawn in around the 2003 death of Brian Wells.

[DISCLAIMER: This contains spoilers for the series Evil Genius]

Released Friday, May 11 as a four part series, Evil Genius is the latest high-profile true crime offering from the online streaming giant, Netflix. Upon its release, it served as featured content, and has likely been viewed by millions (only a guess since Netflix is notoriously taciturn regarding their actual rating numbers). It tells the story of Marjorie Diehl-Armstrong and is, according to its subtitle "The True Story of America's Most Diabolical Bank Heist."

The events surrounding the death of pizza delivery man Brian Wells have captivated people from day one, and it's no mystery why. On August 28, 2003, Wells received a call to Mama Mia's Pizzeria just north of the Millcreek Mall on Peach Street. He drove to 8631 Peach Street across from New Motors in Summit and was outfitted with a homemade collar bomb around his neck and a specially-fashioned cane gun, receiving written instructions to rob the PNC Bank at the Summit Towne Centre (now closed). Wells was apprehended by the police, where officials soon discovered the collar bomb. Wells died surrounded by police, while being filmed by local news outlets as the bomb went off. The events of that day made their way around the world, with a nearly endless maze of bizarre details. As events unfolded, the story become even more lurid, leading to two more deaths, a frozen body, and a stockpile of government cheese.

If you live in Erie, and especially if you did between 2003 and 2010, chances are you're well acquainted with the basics of this story. You already know the main cast of characters: Diehl-Armstrong, Wells, William Rothstein, and Kenneth Barnes.

Evil Genius highlights each of these individuals. It also touches on the deaths of Wells' coworker, Robert Thomas Pinetti, and Diehl-Armstrong's ex-boyfriend James Roden, the titular "Frozen Body" in the second episode, and discusses Floyd Stockton, who after serving a prison sentence for rape, now lives in Washington state and was accused by Diehl-Armstrong of putting the collar around Wells' neck.

Most significantly, the series concludes with a filmed confession from Jessica Hoopsick, who maintains Wells' innocence. The series refers frequently to a notebook page written by Wells showing the names of several area prostitutes. Among those names was Hoopsick's, one of his favorites. The two formed what seemed to be a deep and legitimate friendship. Hoopsick was serving a prison sentence at the State Correctional Institute in Muncy, Pennsylvania during the same time as Marjorie Diehl-Armstrong. After Hoopsick's release, she met up with filmmaker Trey Borzillieri. On camera she revealed that she helped Armstrong and Rothstein select Wells to do the robbery. This contradicts Armstrong's comments, as well the court testimony from Barnes. Hoopsick's timeline also conflicts with that of witness Michael Douglas, who testified that he saw Wells on the afternoon of the robbery.

Full of expertly crafted tension, the series is riveting to watch. It's made all the more surreal being familiar with the settings, like upper Peach Street. The filmmakers refrain from making any direct judgments about Erie itself. There are numerous tracking helicopter shots of the Bayfront as well as Summit and McKean. Absent are the all-too-familiar dreary scenes of abandoned manufacturing buildings shown in nearly every "post-Trump" news story. It casts its law enforcement officials in a neutral-to-positive light (and downright glowing when compared to the Manitowoc County Sheriff's Department in Making a Murderer), and it attempts to treat the perpetrators and victims with respect. It's notable that the first words visible in the title sequence, before "Netflix" or "Duplass," are "Erie, PA." As much as one's confirmation bias seeks to make Erie a character in this series, the documentary is about a specific series of events and the people around them, and there's plenty there.

As well as the filmmakers do at trying to string together a linear narrative, there might just be too many moving parts to make that happen. Nearly every detail of the case is able to branch out, raising more unanswered questions.

From the opening seconds of the series, it's clear that Marjorie Diehl-Armstrong is not being intentionally demonized here. Throughout, there are countless references to the beauty of her youth and her intelligence — despite how you choose to interpret the title.

On the other side of the law, the person most often on camera is FBI Special Agent Gerald "Jerry" Clark, the lead investigator in the case (FBI Major Case #203). Clark retired from the FBI in 2011 and still resides in Erie. He's now a professor at Gannon University, holding a Ph. D. in criminology. In 2012, Clark, along with the Erie Times-News' Ed Palattella — who has covered the case from it's beginning — wrote Pizza Bomber: The Untold Story of America's Most Shocking Bank Robbery, a 448 page first-hand account of the events. The two also teamed up to pen A History of Heists: Bank Robbery in America in 2015, and Mania and Marjorie Diehl-Armstrong: Inside the Mind of a Female Serial Killer in 2017.

The reviews of the series have been favorable overall, with many citing its binge-worthy presentation. Evil Genius is the heir apparent to Making a Murderer (with this year's Wild Wild Country vying for the position as well). The 2015 hit Netflix original series debuted 9 months after the conclusion of HBO's landmark six part series The Jinx. These two series were arguably the most notable entries in the zeitgeist of true crime that followed the release of the podcast Serial in 2014. The Wells case has been the subject of numerous podcasts itself, including a 2017 episode of My Favorite Murder.

After the cliffhanger of Hoopsick's confession, the filmmakers are open to a following season, though there is nothing announced at this point in time.

Nick Warren can be contacted at nick@eriereader.com