Exile on State Street: Poverty, Violence, and No Voice on City Council 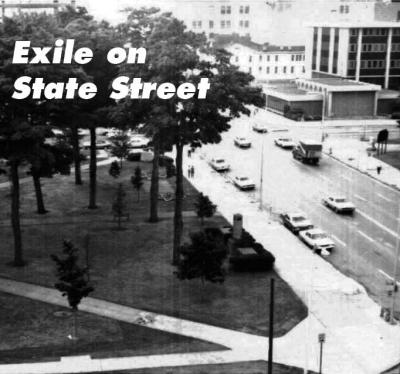 "A pure democracy is a society consisting of a small number of citizens, who assemble and administer the government in person." – James Madison

Obviously, our great democracy is not a "pure" democracy on a state and national scale. Instead, we rely on a representative democracy, as voters in various districts elect representatives who, at least in theory, take the interest of their constituents to their respective capitals.

But what about here in the City of Erie, at the local government level – the City Council? Do these various councilmembers really represent the City's neighborhoods and their unique issues?

I started thinking about this issue recently with the tsunami-like wave of gun violence threatening the City's residents. By the time this article is in print, there will have been approximately 100 shooting incidents in the City since the beginning of January. By all accounts, at least 36 people have been injured or killed in the bloodletting. Many law-abiding residents of the City live in constant fear for their safety, particularly if they're living in the "forgotten" neighborhoods of the City where the majority of the mayhem has been perpetrated. These are the City's depressed neighborhoods, marked by housing blight, infrastructure deterioration, and lack of economic opportunity.

I do not believe that any serious observer of this violence can deny that it is at crisis proportions. To say that the mayor's response to the crisis has been anemic is an understatement. And let me be clear: This is not a condemnation of the men and women of the Erie Police Bureau. They are doing everything they can with what they have to stem the tide of violence. Unfortunately, it took the mayor nearly four months to at least publicly address the situation. And our City Councilmembers, has anyone even heard a peep from them on this critical issue?

From our City officials, there is little interest and even less action. The areas of the City most affected already suffer from a sense of hopelessness. This lack of hope has led to apathy and an environment that condones violence as a means of problem solving. To be sure, this is not the only cause of the violence, but in a City that has seen some better days, I believe it is an important factor. And a significant factor contributing to this sense of hopelessness is the lack of representation of many of the City's neighborhoods in their elected government – particularly the City Council.

The City's current form of government, the Mayor-Council Plan was adopted in the mid-1960s – a time during which Erie was still a growing city. The Plan called for the election of an executive – the mayor – as well as the treasurer, controller, and a legislature – the council. All elected officials, including the councilmembers, were and are elected at-large, meaning individual councilmembers do not represent districts or neighborhoods but represent the entire City.

Perhaps the City was more homogenous back then and this made sense as most neighborhoods were working-class areas supported by the vast industrial strength of the City, but as times have changed, and with the loss of the City's industrial powerhouses, we've seen these neighborhoods slowly decline. The lower east and west sides and the central city have been impacted the most. And as this dynamic has continued for more than a generation, an interesting development has occurred which is probably an unintended consequence of the City's at-large election policy.

Did you know that currently nine of the City's ten elected officials reside in the City's Fifth Ward, the area roughly south of 26th Street and east of State Street/Peach Street? Of the seven councilmembers, only Curtis Jones, Jr. lives in another ward, the Fourth, which includes the West Bay Front and Frontier areas. And Mr. Jones lives on Pittsburgh Avenue, as far west in the City as you can get without being in Millcreek.

Of the remaining council members, only Jim Winarski lives north of 32nd Street.

This phenomenon has been ongoing for the better part of a generation. When I was elected to City Council in 1997, I was the first person elected from the Third Ward in decades. Other Wards – and more importantly neighborhoods – have not had one of their neighbors on Council for decades. A great deal of the gun violence, and for that matter, the blight and lack of investment, is occurring in these same areas.

I suggest that at a time when we should be pursuing more regional government, that we should also be taking care to govern the City sub-regionally. After all, the neighborhood is the fundamental building block of an urban area. We should strongly consider reforms to the City's governance structure.

Most importantly, in an effort to empower the citizens of these neighborhoods, we need to establish an election of councilmembers by population-apportioned districts that reflect the City's cultural and historical neighborhood areas. This would provide a sense of empowerment to the areas struggling with no representation and hopelessness.

The City can initiate a change in its governance by establishing a study commission. This can be done by council ordinance or citizen petition. Recall that Millcreek Township did it recently. It's been fifty years since the City changed its form of government, and it hasn't been the best fifty years for the City. It's time to give the citizens some direct representation before there's no one left to bother.

This will certainly not solve the violent crime wave, but it will give these neighborhoods a champion, who lives around the block or across the street, who shares in the same concerns afflicting their neighborhood every day.

Perhaps when our city councilmembers know what it's like to hear gunshots on their block, they might have a greater appreciation for what their constituents are dealing with. Then, when a problem occurs, perhaps we would hear some demands for action before it becomes a crisis.