Engage with this percussion ensemble at Penn State Behrend 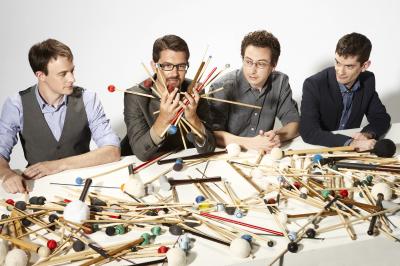 The Grammy award-winning percussion ensemble Third Coast Percussion will be gracing Penn State Behrend with a free concert that is open to the public. Formed in 2004, the quartet has developed a reputation for melding the energy of modern rock music with the technical ability necessary to perform classical chamber pieces. Third Coast Percussion also creates groundbreaking new ways to experience their performance, with iPhone and iPad apps developed to enhance their concerts as well as an ongoing list of collaborators that includes engineers, architects, and astronomers from the University of Notre Dame, the Frank Lloyd Wright School of Architects, and the Adler Planetarium, respectively.

This concert is part of the ongoing Music at Noon series, which aims to engage the community with extraordinary music from around the world.

"Our performances bring artists to Erie who are breaking new ground and sharing their creativity worldwide," says Gary Viebranz, director of The Logan Series and Music at Noon concerts. "This provides a unique opportunity for our student and community audience members to have an up-close-and-personal experience with some of today's brightest musical visionaries."

The group arrives with a number of accomplishments under their belt, including the completion of a recent tour in Hong Kong. They're in position to add to them this year with another Grammy nomination for their most recent album, Perpetulum, from which they will be playing selections at the Music at Noon concert. Bringing in a band of Third Coast Percussion's caliber can do electrifying things for our local arts community, and you won't want to miss this free opportunity to witness a truly engaging performance. — Aaron Mook