Over 70 local artists pour into The Brewerie 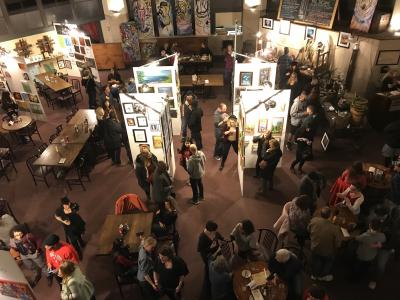 Nick Warren
The Concourse within the Brewerie at Union Station converts into a glorified gallery space at each iteration of the Arts and Drafts festival, which is celebrated bi-annually in March and September.

It's the most wonderful time of the year. While festival season has sadly come to a close for most, The Brewerie is proud to present Arts and Drafts, now in its 11th year. A public, bi-annual celebration of local art and music, the festival was originally created and curated by the late Drew Kauffman. Kauffman was an artist, and more importantly, an Erieite with a vision. That vision has evolved and expanded over the past decade at the hands of those involved, and now, Arts and Drafts feels like a cornerstone of the local arts community.

Of course, at the heart of Arts and Drafts sits the artists that comprise its lineup, and this year, the festival will feature over 70 local artists and 15 local bands — half of which are brand new additions to the Arts and Drafts family. The art will be on display starting Thursday morning at 11:30, and remain open until 10 p.m. If you're tight on cash, The Brewerie would still love to see you there, offering free admission on the first day of the festival. Music begins in the downstairs pub at 6 p.m. with Sam Garwig, followed by Tommy Link, Brooke Surgener, and Chris Ehrich, with the new Teddy Rankin-led outfit The Jeebies closing out the first night of festivities.

"The Jeebies are super excited to be playing at Arts and Drafts this fall," Rankin says enthusiastically. "I've played it twice before as a solo act, but I'm really pumped for people to hear our new group at one of Erie's greatest showcases for art and music! In The Jeebies, I'm joined by Eric Sandberg on drums and Peter Hohman on guitar. We play a collection of our favorite songs from our favorite artists, like the Beatles, Dawes, the Avett Brothers, and Bob Dylan."

On Friday, for a small $3 donation at the door, music in the pub will begin at 5 p.m. as Jennifer Meyer takes the stage, followed by Jess Royer. At 7:15 p.m., trackside music begins with indie rockers Penny Racer, followed by blues duo Paolello and Gone, with good ol' fashioned rock 'n' roll from Falling Hollywood to close out the night.

On Saturday, the final night of Arts and Drafts, Lacey Alyse will kick off music in the pub at 5 p.m., followed by Tiny Paper Boats. Trackside music will again begin at 7:15 with Paper Matches, followed by The Stormalong Scoundrels and This American Song. But three nights of music is just the tip of this iceberg; Arts and Drafts wouldn't have been voted a three-time winner of Best Art Event in the Best of Erie Awards without its myriad of visual artists. This year's featured artist is Derrick Voricci of Wayward Tattoo Studio.

"The pieces I'll be showing for my feature will all be studies in macabre," Voricci explained.

Elaborating on how his artwork has evolved, he said "I'm going back to my roots of thrash and extreme metal with even darker imagery than my usual style. I grew up intrigued by heavy metal album art and comic books. Pushead was a huge inspiration for me when I was young, and still is," speaking of the well-known metal album illustrator.

"It's an honor, and an awesome opportunity to be featured at the September Arts and Drafts," he said. "It's usually such a diverse set of artists, which I love. Arts & Drafts is a perfect opportunity for people to come and see how much talent Erie has to offer."

It's the beautiful fall edition of a bi-annual event that brings visual artists, musicians, Erieites, and more together in Erie's historic Union Square in the name of local talents, and if that doesn't make it one of the must-see shows of the season, well, quite frankly, we're not sure anything else could. — Aaron Mook