Fall Slowly in Love with Once

Once comes to the Warner Theatre on Oct. 17 as part of the Erie in Broadway series. 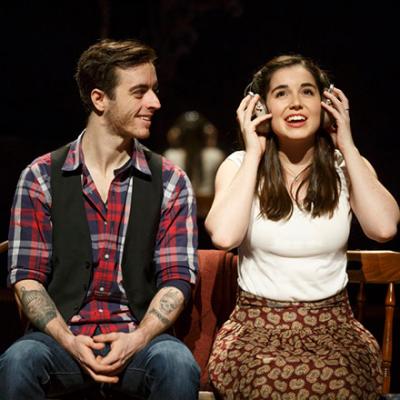 When you're down on your luck, in love and in life, timing can be everything. And the Tony Award-winning musical Once (based on the film of the same name) takes one moment in two people's lives and demonstrates the mystery and beauty of serendipity.

Once is a gorgeously simple "boy meets girl" story – in fact, neither character even has a name beyond just "Guy" and "Girl."

Once comes to the Warner Theatre on Oct. 17 as part of the Erie in Broadway series. It's a gorgeously simple "boy meets girl" story – in fact, neither character even has a name beyond just "Guy" and "Girl." The plot follows a brokenhearted Irish musician (a vacuum repair salesman by day, who jokingly laments his employment in a funny little ditty). He's on the cusp of giving up his dreams to "make it." However – surprise! – "Girl" (who is a Czech pianist) walks into the bar where he's playing a gig one night. She just happens to be in need of a chance to play music … and in possession of a broken vacuum. She plays piano for him, he fixes her vacuum, chemistry swirls in the air, and the two are musically in sync to the extent they scrape together the money to record a demo together. For this production, all actors play their own instruments. "Guy" will be played by Sam Cieri, and Mackenzie Lesser-Roy takes the role of "Girl" in this energetic and thoughtful musical which explores relationships, meaning, human connection, and different expressions of love. – Miriam Lamey