It's a pretty eye-opening mix, but what's most impressive is that Tillman's immense character doesn't overshadow these stunning arrangements.

by Alex Bieler
View ProfileFacebookTwitterInstagramGoogle+RSS Feed
February 18, 2015 at 9:15 AM 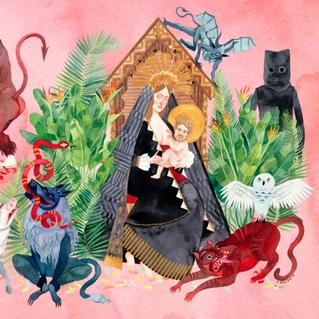 I Love You, Honeybear

While Josh Tillman could be found winking to his audience on the excellent 2012 album Fear Fun, he's now staring right back at them on I Love You, Honeybear, pulling back the curtain to provide a closer look at the entertainer that is Father John Misty. Still, this new perspective doesn't really clarify who this persona is, blurring the lines between hammy sideshow performer and an absolutely sincere folk singer who is tired of 21st century America. The stories Tillman presents on Honeybear may seem less cartoonish than the drug-tripping and novel-writing on display during Fear Fun, some of his targets come off just as nutty. "Save me President Jesus!" exclaims Tillman on the bitter "Bored in the USA," a song that rails against the educational system and housing market while canned laughter plays. It's a pretty eye-opening mix, but what's most impressive is that Tillman's immense character doesn't overshadow the stunning arrangements found on his latest album, making for a welcome encore from Father John Misty's sideshow. – Alex Bieler