Fear of the Dark: Scary Stories to Tell in the Dark Pales Compared to Its Source Material

Sadly, this film doesn't even come close to the books' frightening level. 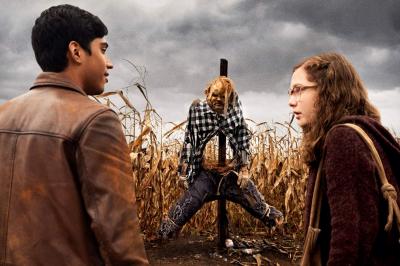 For many children of the '80s and '90s, reading Alvin Schwartz's Scary Stories to Tell in the Dark book series was our first foray into the world of horror. The collection of creepy tales was made ten times creepier thanks to Stephen Gammell's grotesque illustrations, surely the subject of countless tales of nostalgic dread. It comes as no surprise then that they would be made into a film so fans could finally see these chilling stories brought to horrifying life. Sadly, this film doesn't even come close to the books' frightening level.

Set in 1968 (for some reason), the film follows a group of young people who wander into the seemingly haunted Bellows House and end up taking a book of stories belonging to the disturbed and tortured Sarah Bellows. Soon these creepy stories become all too real for this group of teens who must now solve the mystery of Sarah and her family before the scary stories consume them all.

The film has some wonderful imagery, making the most of its source material by bringing these unsettling illustrations to life. It's also well shot and the characters are memorable for the most part. The biggest problem with the film is its story, which tries to connect all these campfire tales and urban legends into one overarching plot that just doesn't do the tales justice. It could've worked much better as an anthology in the style of Creepshow or Tales from the Dark Side but it insists on a narrative that is far less interesting. In the end, the scary stories which should be front and center take a backseat to a predictable narrative which never comes alive the way the books had no trouble doing. — Forest Taylor