Limits on gathering sizes may no longer be enforceable 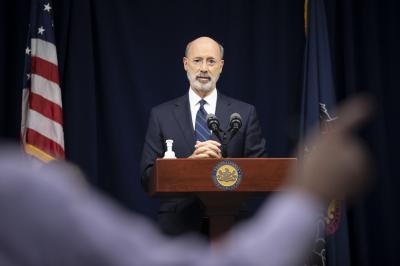 If the past six months have proven anything, it's that there's no instruction manual on how to govern during a pandemic. However, there is a handbook on how people can and cannot be governed, and that is the U.S. Constitution — although as we see time and time again, it's often subject to interpretation.

On Monday, U.S. District Judge William Stickman IV ruled that Governor Tom Wolf's executive orders calling for Pennsylvanians to stay at home, limit gathering sizes, and close "non life-sustaining" businesses were unconstitutional. The 41-year-old Pittsburgh native and Trump appointee determined that Wolf's "overreaching and arbitrary" policies were specifically in violation of the First Amendment, which maintains "the right of the people to peaceably assemble," and the Fourteenth Amendment, which forbids that "any State deprive any person of life, liberty, or property, without due process of law." The governor's office will appeal the decision.

If the ruling is upheld, it means that it will not be possible to enforce the gathering limits still in effect:

Note that when the plaintiffs — which included Butler, Fayette, Greene, and Washington counties — filed the complaint during the "Red Phase" of the governor's reopening plan in May, stay-at-home orders and business closures were also in effect. Other policies such as mandatory public masking and restaurant capacity limits (set to increase to 50 percent on Monday, Sept. 21) were not at issue in this particular lawsuit, although they may surface in others.

"For the millions of unemployed Pennsylvanians, the thousands of small business owners that have seen their livelihoods permanently ended, and all those looking for some relief from these unilaterally imposed, inconsistent, and contradictory shutdown orders, this opinion offers some form of hope that a return to normalcy might be on the horizon."

"The actions taken by the administration were mirrored by governors across the country and saved and continue to save lives in the absence of federal action. This decision is especially worrying as Pennsylvania and the rest of the country are likely to face a challenging time with the possible resurgence of COVID-19 and the flu in the fall and winter."

PA Secretary of Health Dr. Rachel Levine too expressed her concern, hoping that Pennslyvanians would exercise good judgment as individuals with social distancing and crowd avoidance as she questioned the judgment of the federal court.

Whatever the ultimate outcome of the ruling may be, it just goes to show the precariousness of any leadership position while managing a crisis. Where is the line between doing too little and doing too much? And as circumstances continue to shift, how do you stay on it?

If anyone around is selling that textbook, we'd assume it's one you would get fair market value for.

Matt Swanseger (mswanseger@eriereader.com) sure is glad he's not an elected official right now, because jeepers, that would not be dandy.