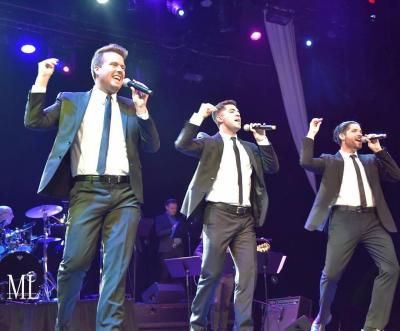 On Saturday, Sept. 25, the Erie Playhouse will reopen its doors to live audiences for the first time in over a year when it welcomes vocal trio Shades of Bublé to the stage. As their name implies, the group pays tribute to the jazzy stylings of multi-platinum Canadian crooner Michael Bublé with stirring three-part harmonies. Among those supplying their vocal cords is Erie native Michael Valentine, who expressed his excitement (and slight surrealism) about performing in front of familiar faces in a home crowd, how the group came to be, why Bublé's music has such universal appeal, how the gents parcel out vocal parts, and more with Erie Reader guest writer and local theater veteran J.D. Mizikowski.

J.D. Mizikowski: Can you tell us a little bit about how Shades of Bublé came about?

Michael Valentine: Shades of Bublé came about in 2015 when our show's creators Ron DeStefano and Melissa Giattino put their heads together to develop a three-man singing group that could tour both on land and at sea. Together they came up with the concept, set list, show structure, choreography and held auditions in New York to find guys whose voices and personalities fit the show. It began as a one-act show with a week to learn every note, lyric, and dance move before our April 2015 debut at the Engeman Theatre in Long Island, N.Y. Over the years it has grown into the two-hour show it is today while taking into account suggestions we've gotten from audience members and group members alike along the way.

JM: Why does his work specifically appeal to you? Rather than cover a broader set of work?

MV: The work of Michael Bublé appeals to me as he is an artist that sings a wide variety of music that has appeal to so many across generations. When you're looking at songs that Bublé either wrote or covered, you find yourself spoiled for choice of songs and genres to choose from. I, like the other guys in Shades of Bublé, do many performing jobs both acting and singing outside of this group, but we all love coming together to perform music that has a strong sense of timelessness. When I see the response we've gotten from audiences all over the world, I feel like a steward of this type of music, bringing it to the next generation in a fresh way that still stays true to the original versions of each song.

JM:  You've been able to perform at the Playhouse as well as with the Philharmonic. What does it mean to you to come back to Erie?

MV: I've been very fortunate to get my start here in Erie. My love for singing and performing was realized here, and to be returning with a show that I am so proud of means a lot to me. This particular night will have an extra layer of excitement in that I am so used to performing for people I don't know. I think it will be a bit surreal to look out into the audience and see so many familiar faces I know and love. Erie's theater community is and always has been incredibly supportive of me, and I'm looking forward to sharing a piece of what I've been up to since leaving here in 2006 and "going out into the world."

JD:  You, as with almost all artists, had to deal with difficulties of not being able to perform live during COVID. How did you fill the time and now that you are able to? How did you get back into the "swing" of things?

MV:  These COVID times have indeed been difficult to navigate as a performer. There was a brief time at the beginning of all this where my phone would ring, and it was another gig, musical, or project canceled. That initial wave of cancellations definitely pulled the rug out a bit as I'd had much of my schedule for the whole year lined up at that point. But, because so much was unknown at the time, I figured I better find a way to create or be creative, so I switched to one of my other passions, painting and design. I worked with my brother and father who are both residential and commercial painting contractors, and in my free time would use my mom's house as my focus for creativity, starting major renovation projects. I got through because I made myself busier than ever before. Now that live performance is opening back up, I've been lucky to be able to ease back into things with shows like Shades of Bublé where we have someone actively helping book and schedule each gig.

JM: Shades of Bublé is a three-man group but how do you decide the song arrangements and who sings what? Is it a collective effort or do each of you tend to have set roles in the group?

MV: The arrangements found in Shades of were done by the incredible David Snyder, and due to the complexity of the vocals we all take certain vocal roles that were decided by our show creators, Ron and Melissa. All three members of the group are tenors, but when it comes to the harmony sections, of which there are many, it tends to be the same person that takes high, middle, or low harmony in each song. When seeing the show you might notice, I'm primarily singing the lower harmony. Which is alright with me as the other guys sing in the stratosphere in a few of the songs.

JM:  Having been in Erie's only production of Tick, Tick… Boom! at the now defunct Roadhouse, what are your thoughts on the soon to be released Netflix production starring Andrew Garfield?

MV:  Tick, Tick… Boom! is a show that will always live at the top of my list of favorite shows I've ever done. When the trailer for the new movie started, and I heard the first few lyrics of the song "BOHO Days," I got goosebumps. I was 19 years old when I played the character Jonathan, who was dealing with the pressure to accomplish something great before turning 30. For that character, he was wanting to write the perfect show, and at 19 I was equating it to my decision to move to New York to try and establish myself as an actor and singer "before its too late." Of course now I know its never too late to do anything and being over 30 now, I'd love to have another crack at the show, knowing what I know now. The cast of this movie looks great, and Andrew Garfield is a fantastic actor (he definitely looks a lot more like Jonathan Larson than I do) so I am very much looking forward to seeing this version. And if productions of Tick, Tick… Boom! start to pop up after its release, you better believe I will be in an audition room. I don't think I'm done telling that story.

JM:  What is your hope with live audiences being able to see you again that they will take away from the show?

MV:  Now that live audiences are back with us, I hope the takeaway from the show is the same as before. I hope it takes people to a better place than when they walked through the doors into the theater with the pre-show music playing. I believe music is the closest thing to magic in our everyday experience. There is nothing like a room full of individuals all singing and vibing along to the same song. If they feel even a little bit of what we feel being able to sing for them, I'll feel like all of us on stage have done our job.

Shades of Bublé appears at the Erie Playhouse (13 W. 10th St.) on Saturday, Sept. 25 with performances at 2 and 7:30 p.m. Tickets are available at erieplayhouse.org