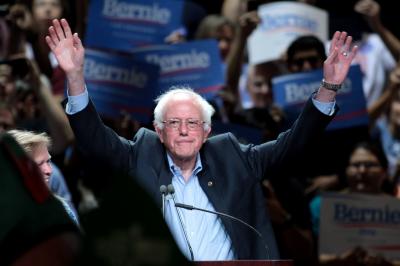 If you're feeling the Bern this campaign season, your first opportunity to catch the man in our blessed Rust Belt is just a few days away. Bernie Sanders will make an appearance Monday, Nov. 16 at Cleveland State University's Wolstein Center. Doors open at 6pm and the rally begins at 7pm.

If you've been following the Democratic primary race, Sanders is closing the gap on Hillary but the Clinton machine continues to control the national media discourse. Coming off of Saturday night's Democratic debate, which CBS has reworked into a conversation about the terrorist attacks in Paris Friday, Sen. Sanders is likely to roll into Cleveland with a strong message of foreign policy and public safety, issues he's tried to address on stage in the past only to be derailed by questions about his rival's email account and other superfluous campaign fodder.

So if you're feeling the Bern, Monday might be your best chance to get a psuedo-front row seat with your favorite Democratic Socialist.

Monday's event is free and open to the public.