Festival Uses Arts and Culture to Combat Racism and Oppression 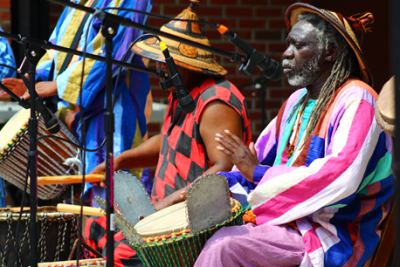 AmeriMasala organizer Lynn Johnson knows that racism won't be eradicated in a day, but he is counting on his July 13 festival to leverage the power of arts and culture as a tool in helping bridge the divisions of race, ethnicity, gender, and class.

Johnson's project, which he first initiated in 1995 and brought back to Erie last year after a 12-year hiatus, is aimed directly at "countering hatred and confronting racism and oppression." Literally, AmeriMasala is a mash-up of "American" and "masala," which means "a blend of spices." To Johnson, however, the meaning runs much deeper than what can be conveyed by a single term or event.

"AmeriMasala is not simply a word or just a festival, it is a movement that emphasizes community and promotes the value and nobility of all people," he says.

But what could be a better way to embody that movement than by organizing a day-long celebration that emphasizes the truly humanitarian aspects of art, creativity, and imagination? And that's exactly what Johnson has done.

Opening festivities will begin at 11 a.m. in Perry Square, highlighted by an appearance by Tonawanda Seneca spiritual leader Leon Sam Briggs, who will offer a traditional blessing known as a "smudging." Briggs will set the stage for the vibrant UnoWE Parade. The parade was inspired by the tradition of the Cleveland Museum of Art's "Parade the Circle" event, which just celebrated its 30th anniversary and features bright costumes, unique floats, giant puppets, stilt dancers, and handmade masks.

The UnoWe Parade promises much of the same, as participants will lead a colorful procession along State Street, between Perry Square and the Erie Art Museum. The parade will feature costumes and musical styles from around the world, headlined by Batala New York, an all-female Afro-Brazilian samba reggae percussion band.

"Batala New York is truly amazing, and it is the type of musical performance that we would not typically have the opportunity to enjoy here in Erie," Johnson says.

In addition to enjoying a variety of performers, those attending the day's festivities will also be able to enjoy a variety of foods. Multiple ethnic cuisines will be featured, and a wide array of food vendors and food trucks will be on hand, providing dining options that represent many cultures and are sure to please any palate.

For Johnson, AmeriMasala is both a pleasure and a passion. He delights in describing the details and has essentially functioned as a "one-man band," simultaneously seeking funding, booking acts, and urging everyone to come out and be part of the celebration. He also credits Margarita Dangel, neighborhood manager with the Sisters of St. Joseph Neighborhood Network, for helping him to revitalize the festival.

This year, however, Johnson has received additional assistance in spreading the word. He's tapped into the resources of Edinboro University's Center for Branding and Strategic Communication, part of the NWPA Innovation Beehive Network, a grant-funded collaboration between Edinboro, Gannon, and Mercyhurst Universities, Penn State Behrend, and the Erie County Library. The collaboration typically focuses on fostering regional business development and expansion, but in this instance, Edinboro's "beehive" was asked to apply its expertise in public relations and marketing communication to help promote the festival.

Edinboro faculty and students developed branding materials for AmeriMasala and are helping Johnson with media relations, social media management, and enhanced promotion within the regional arts and culture community. They also plan to provide Johnson with additional "boots on the ground," traversing the Erie region to hang fliers, increase awareness, and help build enthusiasm.

Although Johnson's enthusiasm level for the project is always off the charts, he is happy to have some help in getting others excited about AmeriMasala, primarily because of the importance of the central message.

"We need to turn people out for this event because the whole point is overcoming differences and bringing diverse backgrounds together," he says. "I've said many times that I want to see a black family and a white family run into each other at a craft store because they are both working on a float or a giant puppet. That is really what we are aiming for." — Tony Peyronel