The British Isles have a curious penchant for cultivating clever songwriters. 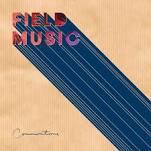 The British Isles have a curious penchant for cultivating clever songwriters. Lennon-McCartney is the pair history best remembers, but the tradition continued well beyond the '60s with Tillbrook-Gifford (Squeeze), Partridge-Moulding (XTC), Brown-Squire (The Stone Roses), and others. Fellow Brits Peter and David Brewis have carried the pedigree into the 21st Century as the brains behind Field Music. Their sixth LP, Commontime, is a cunning cross-pollination of these influences, marrying groove and sophistication in equal measure. Tight, funky tracks dominate the first half, with the propulsive "I'm Glad" and mid-tempo "How Should I Know You Have Changed?" evoking the sleek new wave of Squeeze and The Fixx. The latter half opens up a bit, crossing Abbey Road a few times in the process. "They Want You To Remember" and "The Morning Is Waiting" are lovely baroque pop pieces in the vein of Sir Paul, while "Trouble at the Lights" borrows the haunting Mellotron harpsichords of the Beatles' "Because" before building to Pink Floyd-esque crescendos in its choruses. – Matt Swanseger