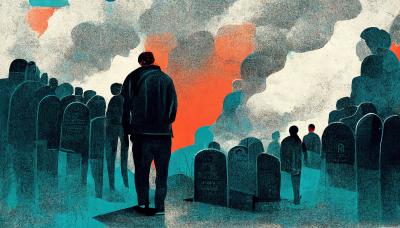 Adobe stock, Rick
The majority of drug-related deaths in Erie County are due to the increased presence of fentanyl, and Pennsylvania ranks the eighth highest in the nation for drug overdose deaths. Harm reduction strategies and legislation may help curb the grim statistics moving forward.

"Without doing the math, fentanyl is our number one killer. About 75 to 80 percent of our deaths involve fentanyl."

In the wake of the opioid epidemic, high overdose rates are unfortunately nothing new. But the degree to which they are increasingly driven by fentanyl is unprecedented. According to the Pennsylvania Office of Drug Surveillance and Misuse Prevention, 78 percent of the 5,343 drug overdose deaths that occurred in our state in 2021 involved fentanyl. In the first three months of 2022, our state's Bureau of Narcotics Investigation seized roughly 40 times more fentanyl than heroin — a haul that amounted to more fentanyl than was seized during the entire previous year.

Using 2020 numbers, the Centers for Disease Control and Prevention (CDC) concluded that Pennsylvania's drug overdose death rate was 42.4 per 100,000 — more than twice the rate they determined for firearm deaths, and nearly five times the rate for homicides. Pennsylvania's numbers were also the eighth highest in the nation. So what is being done about it?

One promising policy change involves the legalization of fentanyl testing strips, following legislation passed unanimously by our House and Senate. Quite literally, these strips can allow drug users to test for the presence of fentanyl in the narcotics they acquire. Operating somewhat like a COVID-19 or pregnancy test, users simply dilute a very small amount of their drugs in water, and within about two minutes they can assess whether or not fentanyl is present in the supply.

Fentanyl testing strips are also useful for outreach and education. Workers in emergency departments, clinical settings, and addiction services can use them to notify their clients and patients about safer drug practices. The strips obviously won't guarantee that overdose situations will be avoided — and questions remain about how seriously they'll be taken by people with addictions — but they can provide a crucial lifeline to folks who aren't ready to enter recovery.

To get a better sense of the impact of the legislation, I reached out to Scott Coughenour, director of the Erie County Office of Drug and Alcohol Abuse (ECDA). "If funding is secured for the utilization of fentanyl testing strips," says Coughenour, "the ECDA can then move forward rapidly by soliciting providers to assist us in generating public awareness of the availability of the testing strips, and in providing the strips at key locations within our community."

Coughenour sees fentanyl testing strips as part of a larger harm reduction strategy in Erie, which includes "drug and alcohol screenings, assessments, treatment referral and monitoring, along with case management support" within his organization alone. Harm reduction tactics have gained momentum in Pennsylvania over the past decade, especially following the 2014 passage of "Good Samaritan" laws that provide legal immunity to people experiencing overdoses — and to anyone who intervenes to save their lives. That same year, a Senate bill (Act 139) was implemented to provide intranasal naloxone (informally known by its typical brand name, Narcan) to first responders free of charge. In 2022, Narcan can now be made available by prescription through a family doctor to "anyone at risk of experiencing an opioid-related overdose, or who are family members, friends, or other persons who are in a position to assist a person at risk of experiencing an opioid-related overdose," according to a standing order from our state's physician general.

Harm reduction strategies are informing law enforcement tactics as well. For example, our police department is presently establishing a Diversion and Identification Unit to connect low-level and non-violent criminals to recovery resources. They are also initiating a Survivor Follow-up Team to provide service referrals and additional support for recovery.

Bipartisan momentum has also been growing for the decriminalization of Syringe Service Programs (SSPs), which provide access to clean syringes and medical supplies in settings where drug users can access a variety of other services. Four SSPs are currently operational in Pennsylvania, despite being technically illegal. However, if legislation introduced by state Rep. Sara Innamorato (D-Allegheny) and Rep. Jim Struzzi (R-Indiana) passes, SSPs could be decriminalized, expanded, and supported with federal funding.

The story of the overdose and opioid epidemic would not be complete without mention of the egregious actions of the pharmaceutical industry over the past two decades. The dishonest marketing, pseudoscience, and outright criminal behavior that have mobilized the sale of opioid pain relievers since the 1990s is too massive to fully outline here. Instead, let's focus on one of its few silver linings — the $26 billion payment that four of our nation's largest corporations recently agreed to in response to a lawsuit concerning their role in the opioid crisis.

Three drug wholesale companies, AmerisourceBergen, Cardinal Health, and McKesson, will pay a combined $21 billion, while manufacturer Johnson & Johnson will add an additional $5 billion. And those payments have just begun across the nation — as well as in Erie.

"Erie County received its first allocation of opioid litigation settlement funds in September of this year," according to Coughenour. "Very recently, we finalized the formation of the local oversight committee that will be tasked with managing those funds in order to best enhance the services available to combat the opioid crisis within our community." This committee will manage the distribution of settlement funds of approximately $16.4 million dollars over an 18-year period, ending in 2039.

According to Coughenour, the funds "will be used solely to enhance our strategic local approach to combating opioid abuse and opioid abuse-related issues within our community. The inaugural meeting for the Erie County Opioid Settlement Fund Oversight Committee, which consists of a seven-member panel of local professionals who were chosen on the basis of their expertise and knowledge of the effects the opioid crisis has had in our local community, is set to occur on Dec. 6, 2022. Once the committee has met, the expectation is that the funds will be allocated in accordance with the needs of our community, beginning in early 2023."

As someone who has written about opioid abuse periodically over the past decade, the fight for effective action can seem both exhausting and futile. The rise of fentanyl and the impact of the COVID-19 crisis have undermined a lot of the progress being made to help people with addictions. "I think for quite some time the system as a whole was operating in somewhat of a 'crisis' mode, just trying to deliver the best service we possibly could in light of the extreme (global, national, and local) challenges that COVID-19 presented," says Coughenour. With these challenges being (slowly!) overcome, he is focused on "strategizing for new intervention and treatment modalities, and planning more education and outreach initiatives."

Regarding fentanyl, perhaps a balance between alarm and caution is appropriate. When you read that fentanyl is "up to 50 times stronger than heroin and 100 times stronger than morphine," you can trust that those figures come from the CDC and act accordingly. However, recent reports about how deadly it is to touch are mostly overblown. And, perhaps unsurprisingly, Halloween came and went this year without any real danger of fentanyl in the candy supply — contrary to plenty of cable news fear-mongering.

Ultimately, the harm reduction approach — which looks at addiction as a public health problem rather than a purely punitive one — seems well-suited to the terrifying task at hand. A community that seeks to rehabilitate people living with addictions strikes me as far preferable to one that wants only to ostracize, criminalize, and quarantine them.

For more information regarding drug abuse and addiction services, please call the Erie County Office of Drug and Alcohol Abuse at 814-451-6877 or drop by to schedule a meeting with a case management staff member at 240 W. 11th St., Suite B-050 in Downtown Erie.

Dan Schank can be contacted at danschank@gmail.com