FILM at the Erie Art Museum kicks off with Alex Garland's Ex Machina, which puts a spin on the sci-fi genre. 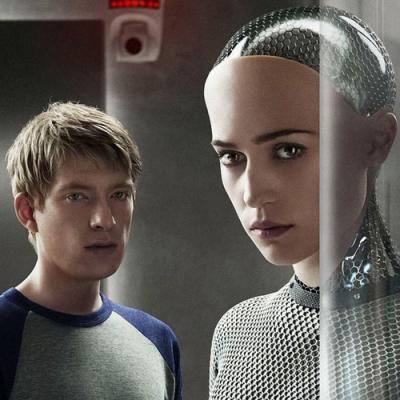 In the realm of science fiction, it's rare to find movies that fully manage to separate themselves from the preconceptions and limitations of their genre. It's equally rare to find a film that, in attempting to do the latter, doesn't wallow and absorb itself in pretense and false complexity.

In Alex Garland's Ex Machina, we have a movie that is completely comfortable in the conventions of its own genre, but we also get the feeling that it's playing with some of the pieces.

Strikingly, Ex Machina is narratively and thematically defined by its front-and-center treatment of human relationships. Caleb (Domnhall Gleeson, Frank), is a naive programmer at the world's biggest search engine, who wins an arbitrary chance to partake in one of the company's top-secret operations. Nathan (Oscar Isaac, brilliantly) is the company's manipulative, alcoholic CEO, and the head of an attempt to create artificial intelligence.

That attempt comes in the form of Ava (Alicia Vikander), a preternaturally intelligent and sensitive robot, who may or may not be the first embodiment of authentic artificial intelligence. Caleb's responsibility is to interact with Ava to determine whether her thoughts, emotions, and actions are a result of computed precision or genuine individualistic ability.

The film is undeniably heavy on ideas, mainly the relationship of humanity and science. It's the film's performances that make these gorgeously rendered connections in idea, but also its technique. For all its densely arranged ideas, Ex Machina is remarkable in its calculated look and feel, which, integrated with its writing and performances, allows the movie, which will kick-off FILM at the Erie Art Museum's summer season, to move between its intellectual constructs in natural motion.

Ex Machina is no perfect film, yet it's still ceaselessly enthralling and aware of its purpose. Its greatness can be disputed, but its achievement as an exceedingly rare, thought-provoking science fiction film cannot.  — Eric Kisner